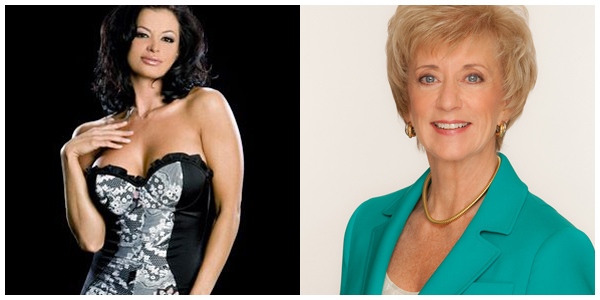 Well folks, we knew it was going to come and bite WWE in the ass one day! All those bikini contests, mud wrestling matches, HLA etc., etc. Pretty great ammo for a political mud-slinging competition, wouldn’t you say? According to The Daily Caller, former WWE CEO Linda McMahon‘s political opposition Rob Simmons is using many a trashy WWE segment in his bid to beat McMahon to a Senate seat.

In particular, Simmons and The Daily Caller bring to light the numerous T&A segments used on WWE television:

The wrestling league has always drawn fire from conservative critics who saw cartoon-like entertainment being marketed to kids that also happened to include two lady wrestlers locking lips, the unveiling of Playboy covers at wrestling matches, and segments flirting with bondage themes and necrophilia. The WWE’s era of explicit programming climaxed with an infamous romp under the covers in the middle of a wrestling ring.

Perhaps more interestingly however, is Simmons’ bringing to light now former WWE Diva Candice Michelle‘s history of starring in fetish movies. The article however, incorrectly refers to Candice as if she were currently under employment — WWE released Candice in June of last year.

The article features quotes from Candice and let’s just say, they make for a fascinating read. Follow the cut for more:

But unknown until now – even, they say, to her campaign and top WWE officials, are dozens of sexual fetish movies starring a popular WWE diva released over several years the diva was under the employ of McMahon’s WWE.

The titles of these movies include classics like “Bare Breasted Bondage Girls,” “Tied, Gagged and Frightened!,” “Girls Will Chloroform Girls!” and “Dirty Soled Dolls.”

The WWE diva who appeared in those films, Candice Michelle, starred in 58 fetish movies between 2002 and 2006, mostly under the name Mackenzie Montgomery.

Still, the movies and their titillating titles might make McMahon a little anxious up in Connecticut. “I would be on set and if it was for my feet, like, I would be sitting on a patio and they would just film my feet. It’s so simple that it’s almost hard to believe it’s that simple. I think once in a while we did do, like, with the tie-up ones, there might be some kind of a corny story of some other girl coming and tickling you while I’m tied up because tickling is a fetish,” Michelle said.

According to Michelle and top WWE officials, neither WWE — and certainly not McMahon! — knew about the movies while Michelle was climbing up the WWE ladder from on-screen makeup artist to champion wrestler.

“During [McMahon’s] tenure with the company her job was always the business side. Never at any point of her time with WWE was she involved in content or creative or talent selection. And she certainly wasn’t aware of the situation with Candice Michelle,” WWE’s Michelle Wilson said. (WWE is taking this matter as seriously as if you called their wrestling fake).

Neither is that sort of thing permitted any more at WWE which, as of about two years ago, embraced a “PG” standard in response to the criticism it was getting. WWE now conducts an extensive “background check” on potential divas to screen them for a kinky movie past, Wilson said.

Before the “PG era,” as WWE wrestlers and executives call it, they didn’t take this thing so seriously. When WWE was alerted to another movie of Michelle’s, a late-night cable skin flick, they ignored it because Michelle said it was shot before her contract with WWE was signed in 2003. Michelle also says all 58 fetish movies were shot before her WWE contract as well.

Besides, she said the cable skin flick was just an accident. “The other film that is probably on there that gets you guys curious or whatever you want to call it is – I think it’s called ‘Hotel Erotica’ … I call it a ‘skinimax’ movie … To me at the time, I think I was 19, I thought: ‘Oh, this is a great opportunity. I have nine scenes in a movie and then one is the sex scene it all cultivates [sic] to.’ My mistake was not reading the entire script. When you read the entire script there’s two or three other girls that have two other sex scenes in there and then before you know it it’s actually a ‘skinimax’ movie and not an HBO movie.”

Michelle, if you were wondering, would “absolutely” vote for McMahon, whom she calls “prim and proper … she’s the sweetest lady you will ever meet.”

WWE has a long, long history of embarassing situations involving the Divas and quite frankly, I am going to enjoy watching them return to haunt them. I can’t wait to see how these are explained away. Gosh, I love dirty politics!

The comments from Candice on her fetish movies — I don’t know why but they make me blush a little bit. “You will never see a penis actually touching any orifice of my body.” Wow! I think this is one of those situations where the more you try to explain, the worse it sounds.