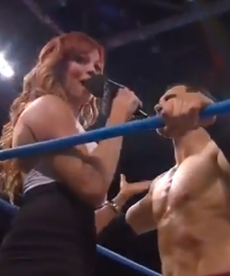 The celebrity news website has dug into the story and found that Austin Aries has been given a “severe fine” as punishment for the act. The amount of the fine is unknown, nor is it known if action was taken before or after Spike TV made its displeasure known.

In addition, TMZ reports that Aries has reached out to Christy personally to apologize, and that she is satisfied with his apology.

If what TMZ is reporting is true, this could signal the end of this particular controversy.

Are you satisfied with Aries being fined, or do you think he deserves a more severe punishment?