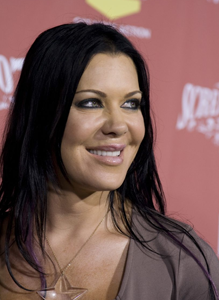 Chyna spoke with the Baltimore Sun on Wednesday, addressing a few rumors and clearing up the confusion about her status with TNA:

On why she decided to get back into adult entertainment: “Well, in the first place, I’m not really getting back into it. The [sex tape with then-boyfriend Sean “X-Pac” Waltman that was released in 2004] was done to me and it was degrading and violating and a really traumatizing experience. You know, I think throughout my career in wrestling it’s kind of been like a three-ring circus. It was a lot of fun and I loved every minute of it. I loved the fans and I loved everything that I did. I branched out from that: I wrote a book and I did Playboy and I did all these things that were very, very successful, and I loved doing every single one of them. So when this came up, I wasn’t necessarily thinking that I was going to go in this direction, but because most of the things I’ve done in my life and most of the experiences have been really great, and this industry was kind of tarnished for me, I just felt mentally that I wanted to experience it, to cross that barrier and see what it was like. I’ve always taken risks and been a pioneer at different things and experiences.”

Whether or not she thinks she’ll lose fans over this: “I don’t think I’m going to lose fans over it. I think it might be a shock, but I don’t think I’ll lose any fans. If anything, I think I’ll gain. And like I said, this wasn’t done to me – it was by choice. It’s a very empowering move, just like wrestling was with my athletic ability to fight with the men and the women and play a character. When I did Playboy it was very successful because my attitude is that I’m doing it for a very empowering reason, and I think that’s logical and it makes sense. But as far as any friends or some of the wrestlers that I stay in contact with, it’s just fun for everybody [laughs]. I love all the hoopla, really. They’re all like, “Go, Chyna.” I was determined to do this. I leave all prejudice at the door as to what people are going to think or what they’re going to say.”

If her new adult film cost her a contract with TNA: “Well, I haven’t actually really spoken with them since I did a television spot and the pay-per-view, but it was never a contract on the line. They asked me to participate in the angle of what they were doing and I thought it would be fun. I went and I talked with them, and it was wonderful to see some old friends. I was elated, and so I did it. We hadn’t really talked about a deal. I just didn’t think that was something that I really wanted to get back into full force. They’d have to make me a deal that I simply couldn’t say no to, because I fought [to own the name Chyna] for years.” … “For somebody to take that from me after all these years, it would have to be something so incredible – which I feel that I’m worth – and that didn’t seem to be the case with TNA.”

Chyna Says TNA Not Bringing Her Back Due to Adult Movie

On whether or not she still keeps up with wrestling: “Not really, to be honest. I certainly flip through – I have to turn it on the days that it’s on, but, like, I’ll watch Monday Night Raw with “The Bachelorette” [laughs]. When I was in WWE, I was in such a great place. Professionally, it was one of the best times of my life and I loved my work. When the carpet was pulled from underneath me, I had a lot of years to heal from that. It took me a long time, which I think most people have seen in the public eye. I kept trying, but it was very difficult and I had some really difficult times. Now I really feel like I’ve come out of that over the past couple years. It’s taken tons of work and healing, but I feel great now, I really do. In going to TNA, whatever happens in the future or not, it was a sense of closure in the sense that after all this time, I could go back and hug all my friends and pass that bridge. Now onto whatever comes my way, and I’m jumping in with both feet.”

Read the full interview at the Baltimore Sun.