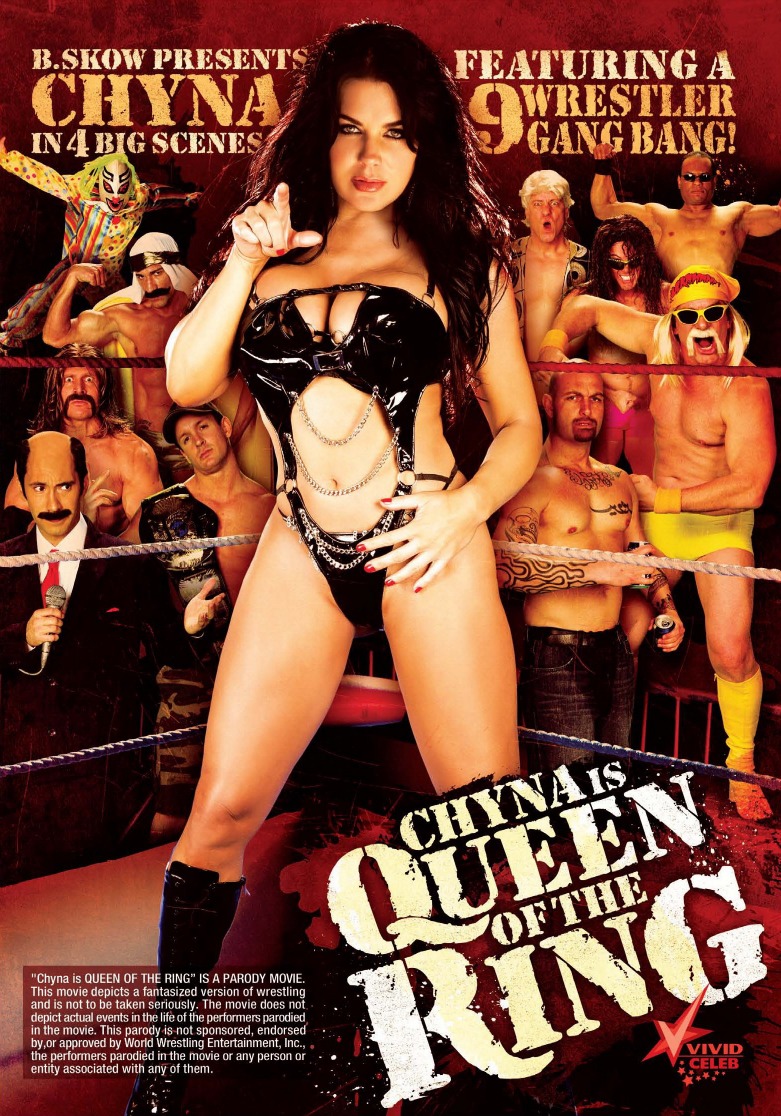 New details on Chyna‘s latest adult film parody have been released. First announced back in February, Vivid Entertainment’s “Chyna is Queen of the Ring” will parody some of the biggest names in wrestling, with a special focus on those from Chyna’s past.

Chyna’s Incredible Sexual Fantasy Has Her Getting Back in The Ring With Parodied Versions of Wrestling’s Most Well Known Characters. The Movie will be available Online on September 4, 2012 and in stores nationwide on September 12, 2012.

LOS ANGELES – (August 27, 2012) – Vivid Entertainment will release “Chyna is Queen of the Ring” an adult parody of professional wrestling, starring former champion Chyna on vivid.com on September 4, 2012 an in stores nationwide on September 12, 2012.

Throughout her amazing pro-wrestling career, Chyna was never shy about her opinions. In “Queen of the Ring” she lets loose in this hard core movie that parodies such icons of the sport as Triple H, Hulk Hogan, The Rock, Ric Flair, Stone Cold Steve Austin, Bret Hart, Iron Sheik, Doink, John Cena, Gene Okerlund, Vince McMahon and Stephanie McMahon.

“This movie made me feel sexy and wanted,” said Chyna. “I was glad it was a long shoot because I was totally turned on and having so much fun laughing a lot with the guys. I think adult movie fans will go crazy over it!”

“I used to dream about being a movie star. I didn’t expect to be making adult movies because I felt insecure compared to all the beautiful women in the industry. Vivid has given me a life changing opportunity to be glamorous and sensual and I’m delighted with it.

“I want my fans to know that I’m better than ever,” said Chyna. I’ve been wanting to make this particular parody for a long time. Of course, I know every player who is parodied and it was great to ‘spar’ with them again, but this time it was really hot on my new sexual turf.”

About Vivid: Founded in 1984, Vivid has always placed heavy emphasis on high quality erotic film entertainment and has created wide brand-name awareness through its films and the www.vivid.com website, an innovative marketing and a licensing program that extends to advertising, apparel, book publishing and a range of other products. Co-founder and CEO Steven Hirsch was honored in 2012 with the first AVN Visionary Award as a leader who “has propelled innovation and taken his company and the business as a whole to new heights.” In addition to its Vivid-Celeb imprint famous for celebrity sex tapes, the company is known for its Vivid Super XXXHeroes parodies and award-winning feature films. Vivid maintains the single largest studio archive of adult films. For more on Vivid visit Twitter.com/VividCorp or Facebook.com/vividgirls.[/notice]

“Chyna is Queen of the Ring” will be available online September 4th and in stores September 12th.