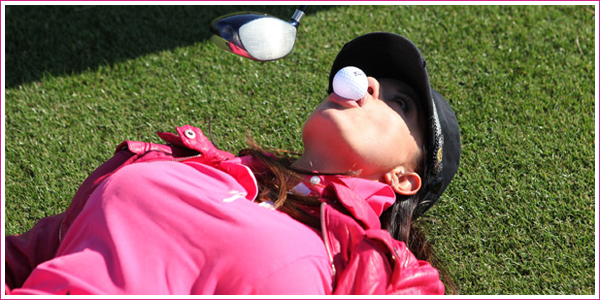 Sure must suck to be injured Diva, Candice Michelle, who’ll have to watch all of her fellow Divas and even some past ones go out to the ring tomorrow night for WrestleMania while she’s stuck in the back watching it on the monitor.

But it looks like injury prone Candice could have a new career up her sleeve, if her days truly are numbered within WWE. What do you do after you leave the WWE and still want fame? Fetish films or trashy reality TV! The former Women’s Champion was spotted at WWE’s golfing event earlier in the week, doing all sorts of whacky crap. So here’s the set-up: “Golfing with Candice”, Candice hosts her own trashy reality show where she takes unsuspecting groups to a golf course where they compete in a tournament and the winner wins a cash prize. However, all the while through, Candice tries her best to put everyone off their game.

Sounds like something FOX would pick up in a heart beat (and cancel after two episodes).