Details on Which Female Wrestlers Took Part in FCW Tryout 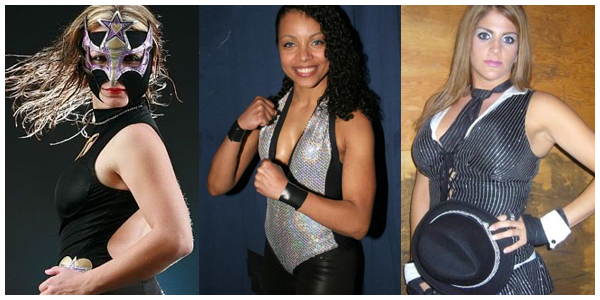 As first revealed by Rain on the latest edition of the Women of Wrestling Podcast, she did not take part in the FCW tryouts a couple of weeks ago as has been speculated by several websites.

Rain revealed that some of the women who were part of the tryout included Sexy Star, She Nay Nay and ‘New York Knockout’ Nikki.

As previously mentioned here, it seemed as though Star was part of the tryout due to posts and pictures on her Twitter page. Star is a Mexican lucha who is best known for her work in AAA.

Meanwhile, She Nay Nay is perhaps best known for her work on SHIMMER pre-show, SPARKLE as well as LuFisto‘s NCW Femmes Fatales. She also appeared on an episode of SmackDown last year as part of the ‘Beth Phoenix Squash Tour’, as we dubbed it here at Diva Dirt, wrestling as Jenny Brooks.

Despite online speculation due to this photo that Rain and others were part of the tryout, the former Payton Banks clarifies that the picture was misattributed to the FCW tryout. The picture is actually of a group, including Rain, Sojo Bolt (Josie) and the Blossom Twins, who took part in a boot camp with wrestling veteran Lexie Fyfe who lives in Florida.

To listen to the full one hour plus interview, which has more details on the tryout, click here. It’s a great listen!