We can all agree that,Â with a few exceptions, Divas get the short end of the stick when comes to entrance themes. While the male superstars getÂ musicÂ from actual bands and artists or custom made songs with lyrics, Divas get stuck with crappy production music. If I had the chance I would change all the Divas music to something a littleâ€¦ well, better. Hence, Diva B-Sides was born; a Diva Dirt exclusive where we matchÂ WWE Divas and TNA Knockouts with new entrance themes. This week’s lucky girl is Jenna Morasca, who’s in desperate need of an emergency B-Side. Let’s get right into things: 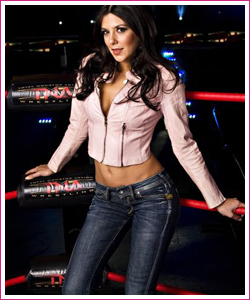 I don’t have to tell you guys that Jenna’s current theme is a masterpiece, do I? A pure piece of musical genius! *COUGH* But seriously, the only thing worse than Jenna’s match at Victory Road was her entrance theme. Therefore, I decided to give Ms. Morasca a Diva B-Side intervention.

I think it was obvious that TNA was trying to tie in Jenna’s history on ‘Survivor’Â when they made her theme: “I will, I will survive!!!” While their efforts were admirable, it came off as some sort of weird gospel/disco hybrid that split the audience between laughing and cringing.

If TNA wanted to go the ‘Survivor’ route, the obvious choice would be this song by DC3 or something similar. Not only does it fit the theme, it’s a great song overall. The fact that it doesn’t make me want to stab myself in the ears with the nearest pointy object is an added plus.

If Jenna did anything right at Victory Road, it was selling sex. Everything from her Beautiful People-esque entrance to that awkward, hard to watch pin, Jenna oozed sexuality (or skankiness depending on who you ask). So what’s the musical equivalent to that, you ask? The Pussycat Dolls, of course!

To be honest, I don’t really care for the PCD version of this song, so I picked a cover done by the Florida based band, Mayday Parade. This version has a little more edge than the original, but keeps the catchiness that makes it such a popular track.

So what do you think? Are you pressing ‘repeat’ or ‘delete’? Let us know in the comments and vote for what B-Side you think is the best.