Diva Dirt’s Five to Watch returns for a fourth year starting tomorrow (November 26th), but before that, let’s take a look back at the Class of 2011.

Last year, Diva Dirt hand-picked five talents for its annual Five to Watch list who we felt were making waves in women’s wrestling and embodied the traits it took to be a standout star. These five talents, we felt, had the talent, the look and personality to go far in the business and as such, they received the Diva Dirt stamp of approval. 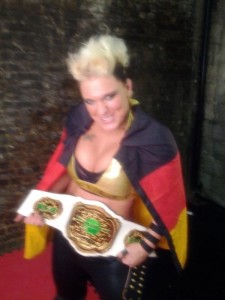 Since being included on last year’s list, Alpha Female‘s career has gone from strength to strength.

In February, she headlined Pro-Wrestling: EVE’s debut Internet pay per view, challenging Jenny Sjodin for the EVE Championship. The pair would face off again in front of a crowd of 1,000 at April’s big British WrestleMania-like event, Wrestling with Ethics, which raised money for charity. Alpha finally defeated Sjodin to become the champion, setting off an eight month reign as champion.

Alpha then headlined EVE’s second iPPV earlier this year, losing the title to the rising Nikki Storm in a controversial fashion.

Despite losing her title, the dominant Alpha Female remains a standout in European women’s wrestling and the world, too, is starting to take notice. Alpha made her debut in Japan in the latter part of 2012, and appeared on an episode of British TV show, “A League of Their Own”.

Go to next page for more…