With the year nearly over, could Gail Kim and Mickie James have squeaked out a last minute option for Match of the Year? 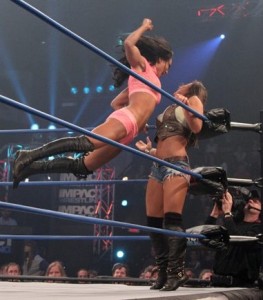 This week, Diva Dirt kicked off its annual awards season and just in time for consideration, the two highly decorated veterans put on a show-stopping match on Thursday’s (November 29th) episode of Impact Wrestling.

The former Knockouts Champions are no strangers to each other in the ring, having feuded in the final months of 2011 and into the early part of this year. They’ve certainly found their mojo in the ring and more than made up for an awkward encounter, shall we say, on WWE’s Monday Night Raw in 2009 with their matches this year.

It was great to see both Mickie and Gail back on Impact, and even greater to see them compete in a lengthy, back and forth match. Women’s wrestling matches and storylines on television may not be to fans’ satisfaction every week, but when all the cards are aligned, there is little to complain about — and this week’s Impact is a perfect example.

Gail and Mickie gave us the best match on TV this week, and perhaps even in several weeks (or months), therefore they win the inaugural Star of the Week honor.