Winning the Divas Championship in her hometown of Houston, Texas was a moment that Kaitlyn will never forget, and to cap a fairytale week, we name her our Star of the Week. 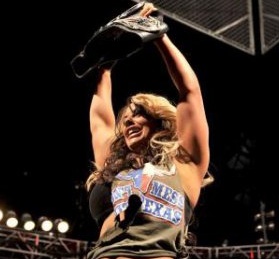 In the two years Kaitlyn has been in WWE — she was thrust into the spotlight on NXT Season 3 in September 2010, having only been in WWE’s developmental territory for six weeks at the time — she has grown before our very eyes as a performer. We’ve seen her development from NXT to now, and it’s safe to say, the former power-lifter has found her feet in the Divas division.

It’s a pretty career-defining moment to win a championship, especially your very first championship, in your hometown. Kaitlyn was overcome with emotion as she won the title on Monday’s episode of Raw and watching at home, we certainly felt elated for her, too.

If winning the title wasn’t enough, Kaitlyn’s win was made all the more special as it took place on the 20th anniversary episode of Raw and it was three-time champion Eve Torres‘ final night in WWE.