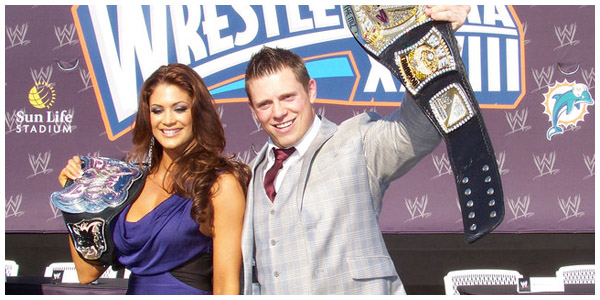 New Divas Champion, Eve Torres spoke to the Miami Herald this past week when she was in town for the WrestleMania 28 press conference.

Speaking on being the new Divas Champ, she says:

“When it is the first time, you almost don’t know how to make the most out of it and to truly fight for it. I think any time you get the chance to represent the title and to earn the title, you learn how to represent it in the best way.

Eve also comments on what it means to get an opportunity to be champion and be the leader of the Divas division:

“All of the divas are given opportunities. It’s kind of the way you go after them and what you do with them. I feel like I was able to cease the opportunity I was given, and now I am divas champion.

“You are representing the entire company. I think it shows the company has faith in you, and we have faith in ourselves.”

Finally, Eve, who will wrestle Natalya on Raw this coming Monday, credits the former champion as helping her develop as a performer. But she also admits she’d like to face Beth Phoenix:

“Just watching her has helped me tremendously. I’d say one of the divas I look up to the most and hope to wrestle someday is Beth Phoenix. She is someone who has worked hard for everything she has gotten. She is such a strong, beautiful, powerful woman. I think she represents the divas well.”

Read more of the article here.