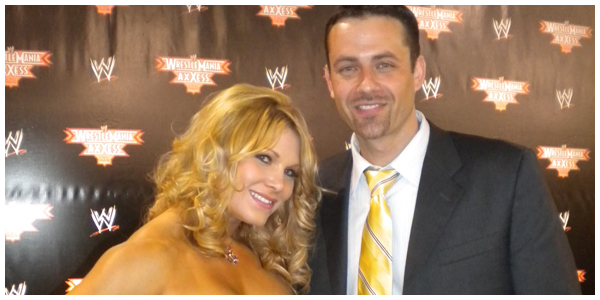 Diva Dirt correspondent and Beth Phoenix super fan, David aka Mr. Glamazon is on hand at this week’s WrestleMania festivities and will be checking in daily with his experiences in Phoenix. Check back everyday to find out which Divas he’s rubbed shoulders with in Phoenix — complete with exclusive pictures!

I tried. I really did. I tried to report the events of WrestleMania in an unbiased way. I think I have done a decent job, at least until Beth picked out the most incredible dress ever for the Hall of Fame ceremony last night. Stunning. Classy. The dress itself will go into the WWE HOF in 5 years. Our favorite Glamazon was radiant and people who met her at the Fan Axxess session later that night couldn’t believe how magnificent she looked. I know this was Wendi Richter‘s night, but as a self-professed Beth mark, this dress was the highlight of the trip. I may never be the same.

My friend and I enjoyed the HOF ceremony last night and… wait, who am I kidding. Other than Wendi, Bob Uecker and Stu Hart it was a snoozefest. I’m pretty sure most people didn’t even know who Bob Uecker was judging by the comments I heard (although Jamie & I are big baseball fans so we liked him). His inductor was Dick Ebersol – a GIANT in the TV business – so that was cool to see him. He told a story about Vince, Jesse the Body, and himself flying to Arizona in 1987 to convince Mr. Baseball to host WM3. Good stuff.

Bret Hart was cool, K2 and Eve looked stellar as the stage escorts, and Ted DiBiase told us we could all be bought and had money fall from the ceiling (sadly not enough to refund our ticket price). Otherwise the stories lacked any real passion and after the energy of Stone Cold’s induction last year this was pretty bland.

Also, last year the Superstars & Divas walked in past all the fans and that was mesmerizing (who doesn’t like to see who they are dating, etc.) but this year they were just escorted to their seats with little fanfare.They did kayfabe it a little – Cena & Batista sat far apart, Punk sat with Gallows & Serena, Simply Flawless sat together, etc. Disappointing no shows – the Undertaker & Rey Rey, although I may have been sleeping already by that point.

This night was definitely very special for our favorite, Wendi Richter, though. As previously reported, the Hot Rod gave a spirited introduction (maybe a slight play on words here) that ended with Richter admitting Piper has the best mouth in wrestling. Given some of Piper’s previous comments about WendiSat night you can insert your own inappropriate joke here.

One thing was for certain, Wendi has matured well over the years. She looked lovely and spoke beautifully. Her speech seemed to come from the heart and was a nice mix of humor and gratitude. It should be shown to future HOF presenters like the Bill of Rights is studied in History Class. (Did you know Ric Flair spoke for 3 HOURS the year he was inducted? Thank God I wasn’t there for that. The only person who is allowed to speak to me for THAT long is my wife and that is only because the state of Virginia recognizes us as man and wife.)

All in all, I really enjoyed Wendi’s speech, I just wish Cyndi Lauper would have inducted her. Random note: I am a huge fan of 80s chick rockers, so Cyndi would have been retro-cool.

I didn’t spend as much time at the WWE Axxess sessions Saturday. Part of the problem is that the WWE booked a hotel for us about 20-25 minutes outside the city which gets to be an expensive taxi ride after awhile. Plus as I mentioned before, Michelle McCool came to our hotel Saturday morning so I didn’t want to miss that. Of the Divas we met this week, she and Layla surprised us the most at how beautiful they are in person. Seems like they are, after all is said and done, Simply Flawless. (Ugh, I may be out of material after 4 days… that joke was lame). True though.

Another thing about the hotel, it is set in the Arizona hills where there happen to be plenty of snakes! Fantastic! I am like Indiana Jones: “Snakes, why’s it have to be snakes?!” That is sadly the only thing Indy and I have in common. So far I haven’t seen any but I look funny staring at my feet everywhere I go.

So Sunday is the big day. Let’s hope the Divas are given a chance to breathe on the show and give us a good match. If it’s the dark match I’m sure myself or somebody will report the results on the site.

Trivia answer from yesterday: Kelly Kelly was 19 when she debuted.

Pictures from Axxess and Hall of Fame: