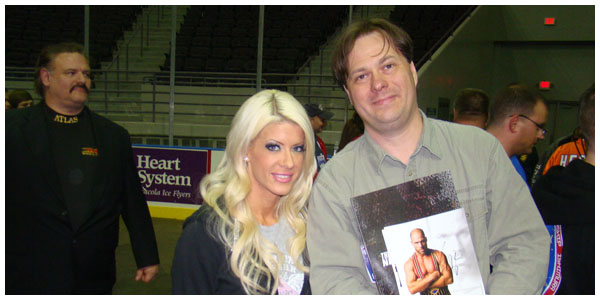 Before the show started, I was to get both Angelina and Sarita’s autographs. Both ladies were very nice especially Sarita as I had the chance to briefly talk to my second favorite Knockout. I told her that loved her matches with Mickie James as they have great chemistry together and I hope that she feuds with Mickie over the Knockouts Title. Sarita that she hopes so too as she wants a run with the belt. I also had the chance to tell her about the nickname that I and some of my wrestling friends have for her, “The Salsa Mama” which she liked. Angelina got the win over Sarita with Botox Injection. I had an eraser board with me on which I wrote: “Sarita: The Salsa Mama” when Sarita came out for the match. Let me say that Sarita is just as good live as she is on TV. I found out after the show that it’s rare for Sarita to do TNA house shows due to her obligations with Consejo Mundial de Lucha Libre (CMLL) in Mexico.

During intermission, I had a VIP pass I bought and I was able to go backstage where I got my picture with Robbie E. & Cookie, Angelina Love and of course Sarita. Sarita told me that she saw my sign during the match which I thought was cool that she saw and remembered my sign. I had written on the board “Sarita: The Salsa Mama of the Knockouts” but the person taking the picture for me couldn’t figure out the zoom on my camera. It was a great show and I really enjoyed myself that being my first TNA house show.