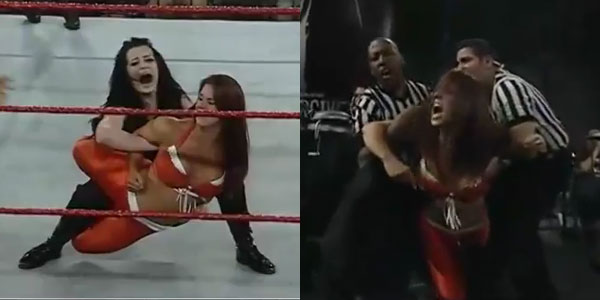 Hola everyone and welcome to another FCW Watch presented by yours truly. For the past few weeks, tensions have been on a rise between the ladies of the developmental territory, as we’ve seen new blood come in, upcoming stars continue to improve, and one conniving champion do whatever it takes to retain her title. This week, though, I’m not even going to sugarcoat it for you… we get a whole lot of amazement. Audrey Marie and Kaitlyn will team up to face the team of Sofia Cortez and the in-ring debuting Paige! On top of that, we get a phenomenal segment involving Summer Rae and Maxine, as well as another one which highlights Raquel Diaz and the “debut” of PSYCHO Audrey Marie who may just become a favorite of yours. Without any further ado, let’s begin!

We head to the arena where the familiar team of Kaitlyn and Audrey Marie hit the dance floor that we call a squared circle. They pose for the fans inside, as some amazing rock music hits and out walks the Anti-Diva team of Sofia Cortez and PAIGE! The two step into the ring as the bell sounds and we get underway with Sofia and Kaitlyn. Sofia imitates Kaitlyn’s muscular stature, which brings them to lock up and Kaitlyn gives her a noogie! Sofia locks the wrist, while Kaitlyn reverses it and hoists Cortez up into the air where she then drops her to the mat in pain for a two count.

Kaitlyn drags Sofia to their corner and hits a nice double team Irish Whip into an arm drag. William Regal brings up Kaitlyn’s walnut crushing thighs once again, as Audrey scores with a nice dropkick that sends Sofia outside. Marie goes for a running move that Sofia ends up stopping, which brings Paige into the mix of things as she ambushes Audrey from behind. Sofia hooks the leg for a two count, which brings William Regal to discuss Paige’s wrestling family! Cortez and Paige double team Audrey a bit, before tagging out as the two drop Audrey with a back suplex.

Paige immediately drills Marie with a snap suplex for a close call, screaming to the referee in anger at his two count! Paige hoists Audrey up and nails a nice sidewalk slam, before locking her in an AMAZING submission hold that I’ve honestly never seen before. Wow. Audrey is basically stretched like a pretzel until Paige lets go, as Sofia is tagged back in and hits a Northern Lights Suplex for a two count. Cortez tries to bring the fight to Audrey, but Marie hits an arm trap neckbreaker and crawls towards Kaitlyn as Sofia tags in Paige. The referee doesn’t acknowledge it for whatever reason, and they do the tag over, as Paige stops the tag from happening. Audrey kicks Paige off, bringing in Kaitlyn like a house of fire with a shoulder tackle!

She knocks Sofia from the apron, before leveling Paige with a dropkick and a huge running crossbody. Paige goes for a clothesline, but Kaitlyn reverses it into a sit down bomb and then locking in an arm submission. The crowd cheers for Paige to get out, but she ultimately taps as Kaitlyn and Audrey celebrate their win. Suddenly, Sofia and Paige ambush the two! Kaitlyn is tossed from the ring while Paige applies a full nelson to Audrey. Sofia heads to the top rope…and what is this?! A barefoot Caylee Turner of all people climbs onto the ring apron and tosses Sofia off! Raquel Diaz is out now and all hell has broken loose as Kaitlyn dropkicks the dang tiara off her head! The lines are drawn between teams, as these six Divas stare off with one another.

Backstage, we spot the amazing team of Corey Graves and Jake Carter standing by, as our new General Manager, Summer Rae informs them that she sees them fitting in her organization. The two head off, which brings her to instruct Naylor to make reservations for her and Jake on Friday, with Corey on Saturday!~ Suddenly, Maxine steps into the room and cuts Naylor off, as Summer sarcastically asks if she likes what she’s done with the place. Maxine claims it’s very “her”, and Summer agrees! Maxine then bends down and lets her know that she’s not finished with her, before turning around and slapping the ever loving glasses off of Naylor’s face! I think he begins to cry, but Summer simply stares on in anger at this bombshell laying a hand on her scribe. There will be hell to pay!

Later on in the show, Raquel Diaz walks out and introduces herself, before realizing her banner is not here yet. She goes over her list of accomplishments, stating that she’s so close to making Audrey Marie snap. Diaz continues to taunt her, stating she’s surprised it hasn’t happened already. She cites Audrey’s “WWE Muscle”, Kaitlyn, as helping her try to fight off the Queen of FCW. Raquel continues speaking, until she is AMBUSHED by the debut of “Psycho” Audrey Marie aka my new idol. Audrey pounces on her and goes INSANE, not letting up on Raquel as referees are forces to restrain her. The crowd cheers them on, as Audrey lets out some amazing screams and chases Raquel to the back after fighting the referees off! AMAZING!

Thoughts: Starting with the match, personally, I think it’s the best Divas match we’ve seen on FCW in a long time. Paige brought it to a new level truthfully, and she and Sofia will likely continue to do that for however long they team together. I would kill to see Kaitlyn and Paige go one on one because I think it could be amazing if given enough time, which I’m sure in FCW, it would get. The submission was unbelievable and things like that will only help Paige even more to standout from everyone. She is so unique from the whole roster.

Summer and Maxine’s segment was also pretty great. It’s no secret that I really enjoy both women, and seeing her smack the specs off the scribe was kind of horrifying because it really did look like he was crying from how painful it was. I’m not sure if these two will continue to feud after this set of tapings as I don’t believe Maxine was at the most recent ones, but we’ll have to wait and see. I’m all for anything that gives either woman more screen time.

And finally, Audrey Marie, you have found your calling. I love the cowgirl gimmick, but hot dang, if you could just play this insane loose cannon in everything you’d be unbelievable! I thought the segment was very well done by both ladies, although I don’t understand why it was shown this week instead of next. I’m not complaining though because I loved everything about it. I’m glad this was more than just Raquel cutting another promo about her banner, as this honestly added so much to Audrey for me. It felt like the two have had an actual storyline driven feud for the first time, rather than just a series of matches where Raquel won Audrey’s title. I miss segments like this in wrestling, where someone just completely snaps, and I think it can do wonders for Audrey if she continues on with it.