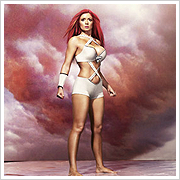 A British female wrestler, who once aspired to be a WWE Diva is now a Gladiator! Following the success of American Gladiators, UK’s Sky One commissioned the return of the British version of the show. 24 year old Jemma Palmer, whose profile on the show’s official websites cites that she was once invited to be a WWE Diva Search finalist, has made the cut and will appear on the show when it premieres in May 2008. Jemma will go by the name of Inferno. Read her profile below:

Jemma is a wrestler, trained by the team behind Ultimate Warrior, having won a scholarship with Ultimate Pro Wrestling. She was also invited to be a WWE Diva Search finalist and was a Musclemania finalist and fitness competitor. Jemma has been a Miss Hawaiian Tropic finalist, a Ms USA Dream Bikini Body finalist, a Maxim Little Black Book UK top three winner and a Miss Maxim UK finalist. She also has a purple belt in submission wrestling.

Upon doing some googling, Diva Dirt found out that Jemma was one of a select few British wrestlers who received a tryout when WWE was doing an overseas tour in the UK in November 2005. In fact, there is an interview with Jemma still on WWE.com, which you can read by clicking here. It’s interesting to note, that one of the other girls also invited to the tryout was Katarina Waters – now known as Katie Lea! Gladiators premieres on Sky One in the UK, in May. For more information on the show click here.