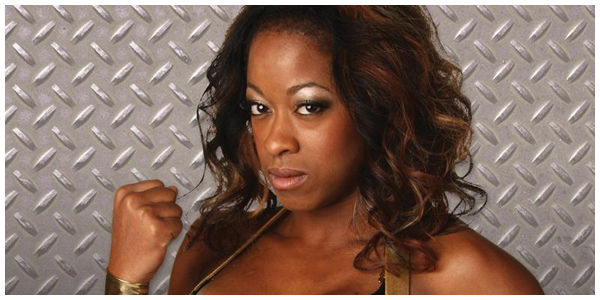 Diva Dirt is excited to be the first to reveal that former TNA Knockout, Sojo Bolt aka Josie has signed with Wrestlicious. Josie, who has been working for OVW in recent months since her TNA departure, will make her Wrestlicious debut in a future episode of TakeDown.

LOS ANGELES, February 26, 2010—Josie Bynum, a former TNA Knockout who performed as Sojourner Bolt, has signed with Wrestlicious LLC and will make her in-ring debut on an upcoming Season One episode of Wrestlicious TakeDown.

Bynum was rated in the top 25 of the PWI “Female 50” for 2009. This brings the total number of Wrestlicious TakeDown performers in that ranking to 18, or more than one third.

“It’s true! Josie is coming to Wrestlicious,” said Bynum. “I am excited to help bring great women’s wrestling into the forefront of sports entertainment.”

“We are thrilled to welcome Josie to TakeDown,” said Wrestlicious Senior Producer Johnny Cafarella. “She is a terrific wrestler, has an awesome work ethic and knows the ropes of the wrestling business. She’ll be a great fit here.”

TakeDown premieres Monday, March 1 at 11 PM EST in the US on MavTV (http://www.mavtv.com) (Dish Network channel 361) and Bite TV (http://www.bite.ca) in Canada. America One Network (http://americaone.com) will air the TakeDown series on Saturdays at 11:30 PM EST beginning March 6.

In addition, the new series is syndicated to network affiliate and broadcast stations in selected markets. It also will be archived on Demand at www.bite.ca/wrestling and available online starting the first week of March.

Earlier this week Wrestlicious Founder Jay Vargas was asked what viewers can expect in the premiere episode of TakeDown:

“The wrestling will be stronger than most people think it will. It will be very, very character driven. In fact 2/3 of the show will be sketches and other character development stuff with about 1/3 being in ring wrestling. Even the commentary will be as much about describing the characters as describing the action,” Vargas told Melanie Rob of Diva Dirt. “Remember, TakeDown is an ACTION/COMEDY show, the Man Show meets Hee-Haw meets female wrestling. This is the premise it was sold as, an action/comedy with wrestling as the vehicle. And that’s how we’re delivering it.”

We will be speaking to Josie in the next few days for an exclusive interview. If you have any questions for her, please leave them in the comments.