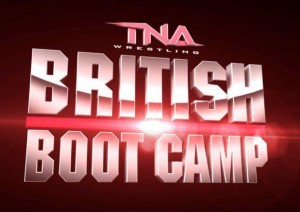 Britain’s Challenge TV has issued a press release for new TNA UK-based series, British Bootcamp, which will feature four British wrestling talents fighting it out for a TNA contract.

The Blossom Twins, Hannah and Holly, are among the cast.

The show will run for six half-hour episodes starting in December.

TNA Wrestling: British Boot Camp will go behind-the-scenes of TNA Wrestling’s search for a UK superstar. Exclusive to Challenge TV, the series documents the story of four aspiring home-grown wrestlers as they pursue a professional wrestling contract with TNA Wrestling.

Challenge viewers will experience the triumphs and tribulations of Manchester-based female tag-team wrestling twins Hannah and Holly Blossom, along with two male wrestlers Marty Scurll and Rockstar Spud from Cambridge and Birmingham, as they embark on their ambition to join TNA’s wrestling roster. Cameras follow them as they travel from their homes in the UK to the USA, get trained and mentored by famous names from the world of UK and US wrestling, and meet TNA’s President Dixie Carter.

The finalists will enter the TNA developmental system, to hone their wrestling skills, and be put to the test by legendary British wrestlers and current TNA stars including Rollerball Rocco and Hulk Hogan. Culminating with a match at the TNA Impact Zone in Orlando, Florida, they compete to impress the judges and Dixie Carter. It’s an opportunity of a lifetime for the professional wrestlers. At the end of the series the successful candidate(s) will get signed to a contract by TNA and have the chance to appear in front of a home crowd on the TNA World Tour which travels to London’s Wembley Arena in January 2013.

“TNA Wrestling: British Boot Camp really is compulsive viewing,” adds Dominic Wilkins, Acting Director of Challenge TV. “TNA Wrestling has a huge fanbase in the UK and it’s great to be able to commission exclusive original content which cements Challenge TV as the UK home for TNA Wrestling. This series will provide unmissable entertainment content which resonates with our viewers.”

John Jelley, Sky Commissioning Executive for factual and features said: “We are confident that this show’s focus on four of Britain’s most promising wrestlers will inspire Challenge’s passionate TNA fans, and draw in a new audience to professional wrestling, as we track their daunting journey from the UK, through TNA boot camp to the high pressure finale in Florida.”

TNA Wrestling: British Boot Camp marks Sky’s first non-game show commission for Challenge TV since it re-launched on Freeview last year. It aims to compliment the burgeoning success of the TNA Impact series which is one of the top performing series on the channel and aims to enhance the channels late night male-skewed audience. The series supports Sky’s commitment to increase its investment in home grown content to £600m by 2014, and will let viewers see first-hand what it really takes to become one of the superstars of TNA Impact Wrestling.