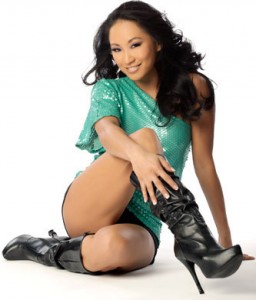 Former WWE Women’s Champion, Gail Kim, has posted more about her decision to quit WWE on her Twitter page.

Gail says that she didn’t request her release from her contract, rather that she quit, telling TNA Knockout, Tara:

I didn’t ask 4 a release. I QUIT. Lol meaning I don’t want their money I’d rather be freeeeeeee haha :)

Responding to a question about why WWE hasn’t announced her departure on the company website, she wrote:

I don’t know but I’ve been telling them since monday I quit. So either they have control issues or they’re in denial.

Gail Kim and Melina Comment on Their WWE Departures

Every1 sounds sad like its a depressing thing that I quit. Guess what? My life is actually beginning again instead of being stagnant letting my talent go to waste. I waited too long, that should be the depressing part!

Finally, Gail wrote to a fan who said she was giving up ‘the biggest stage for exposure’:

how can it be the biggest stage when the divas got 30 seconds of tv time? Blink and u miss action. Right. Tons of exposure.

Thoughts: I’m not sure how one just quits when they’re under contract. If Gail just quit and walked out without being granted a release from her deal, it could be breach of contract and the company could file a lawsuit. For all intents and purposes, WWE has yet to officially announce that they have released Gail. This could be a sticky situation.

As for her criticisms of WWE, she’s not saying anything that fans haven’t said. You’ll be surprised how many girls feel exactly how we do. It seems like Gail is in a great place personally and financially, so can afford to walk away, and she is. More power to her.