SmackDown Redux: The Days of Cute, Perky Little Princesses Are Over! 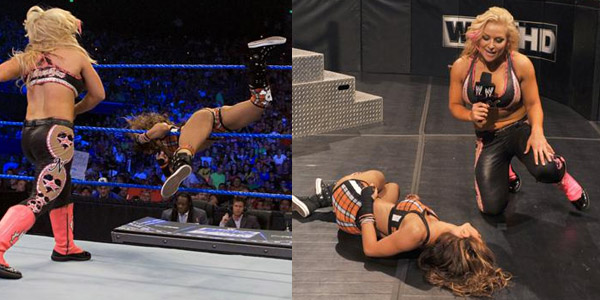 This week on SmackDown, teacher took on student as Natalya and AJ faced off in a singles match. Will AJ surpass her mentor or does Natalya have a few more lessons to teach? Check out the match below:

Out first is AJ, who is perky as always. Natalya is out next to a pretty decent pop from the audience. After a few awkward grins to one another, the referee signals for the bell and our match is underway.

They start things off with a handshake before locking up. AJ gets the upper-hand with a waistlock, but Nattie reverses into a waistlock of her own. AJ escapes and slaps on a hammer lock, but Natalya reverses once again with a fireman’s carry into an armbar. AJ tries to to turn the tables with a head-scissors, but Nattie kicks out, leaving both Divas at a stalemate.

AJ and Nattie lock up once again and AJ attempts to take Natalya down to the mat with a headlock. Unfortunately for AJ, her small frame allows Natalya to easily toss her away. AJ tries once again, but this time uses her agility to run off of the ropes and take Nattie off of her feet.

Nattie fights back to a vertical base and whips AJ off of the ropes, but AJ gets the upper-hand yet again with a wheelbarrow armdrag. Frustrated with the resilient AJ, Nattie ties her up in a submission, but AJ wiggles once again, managing to lock in a submission of her own right before Nattie kicks her in the face.

Natalya whips AJ off the ropes yet again, but the ‘Geek Goddess’ goes for a crucifix pin. When that fails, she converts into a sunset flip. Natalya rolls through the pin attempt and locks in Sharpshooter, making quick work of AJ.

Post-match, Natalya turns heel and beats the hell out of poor AJ, which is reminiscent of Beth attacking Kelly this past week on Raw. After she’s done, Nattie grabs a mic and says she agrees with Beth and that “… the days of the perky, cute little princesses are over.”

All in all, a great segment. I wish the match was longer, because AJ and Nattie really had some great chemistry, but it was still a good match. The post match beatdown was excellent, in my opinion. Much like Kelly Kelly on Monday, AJ sold this beating like a champ, making it so much more believable.

Like everyone else, I’m wondering where does this heel turn lead? Beth’s turn was needed to make her the #1 Contender, but what is the point of Natalya’s. Perhaps she will align herself with Beth and return to Raw? I surely hope so, because the Sisters of Destruction could be the most dominant Diva duo since Lay-Cool. Can’t wait to see how this Natalya storyline plays out in the coming weeks.

This week we also got the official debut of NXT3 Rookie Diva, Aksana, sporting a brand new look. Watch below as she tries to seduce Teddy long into giving her a spot on Smackdown:

Cute segment here between Aksana and Teddy. Aksana’s strongest asset is her character, so I’m not surprised to see her being used in that capacity to SmackDown. I foresee a lot more of these segments with Teddy Long in our near future, so hopefully it doesn’t get stale too quickly.

Overall, a really good week for the Divas on both Raw and SmackDown. Hopefully, WWE will continue giving the Divas some decent writing and some time to work with.