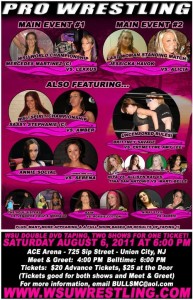 * Jessicka Havok comes out to congratulate Allysin and calls out Alicia. Alicia storms the ring and lays Allysin out with a kendo stick. Alicia cuts a promo saying that Jessicka needs Allysin Kay to help her fight her battles. Alicia says she’s going to kill Jessicka tonight.

* Serena d. Annie Social via spear in a fantastic match. Annie got a HUGE pop for her rolling elbow out of nowhere. The chopfest between the two had the crowd going wild.

* Post-match, Serena gets on the mic and says she’s the best in the world and that she has her eye on the WSU title. Says she will take the title. Rain interupts and says that she deserves a title shot. Serena says she needs to prove it to her. Looks like it will be Serena vs Rain.

* Gabby Gilbert (formerly known as Roxie Cotton) vs Rain is next.

* Rain informed management that she doesn’t work the midcard. Match is changed to Gabby Gilbert vs Violet.

* Amy Lee vs Brittany Savage Uncensored Rules Match is next.

* Post-match Lee calls Savage back and give her props. Lee then announces that this is her last match.

* Mercedes Martinez d. Lexxus with the fisherman buster in a fantastic 73 minute match that went all over the arena. Lexxus proved all her critics wrong and got a standing ovation post-match.

* Post-match, Rick Cataldo calls out Monique and yells at her. Gabby Gilbert interrupt and we have our next match.

* Gabby Gilbert d. Rick Cataldo via top rope senton. After the match, they embrace and Gabby lays Rick out with a flatliner.

* Allysin Kay vs Sassy Stephie ends in no contest when Jessicka Havok comes out and convinces Sassy to join them. The trio is now known as the Midwest Militia.

* The Belle Saints come out and berate the Militia for throwing the match and challenge them to a match. Sassy and Kay v Belle Saints next.

* Serena d. Rain via spear. After the match, Boston Shore rushes out and attacks Rain and Serena. Amber says she deserves a title shot next.

* Serena and Rain vs Boston Shore set for the next iPPV!

* Brittany Savage d. Jennifer Cruz with her RKO finisher. After the match Rick and Monique try to attack Savage, but she lays them all out.

* Alicia vs Jessicka Havok ends in no contest when Havok tries to suffocate Alicia and Brittany Savage makes the save. After a heated exchange, Amy Lee comes out and announce that she is WSU Commissioner. She announces Midwest Militia vs Mercedes, Alicia and Brittney at the November 19th iPPV.

Additionally, Allysin Kay vs Alicia, Sassy Stephie vs Savage for the Spirit Championship and Jessicka Havok vs Mercedes Martinez are booked for the March 2012 5th anniversary show.