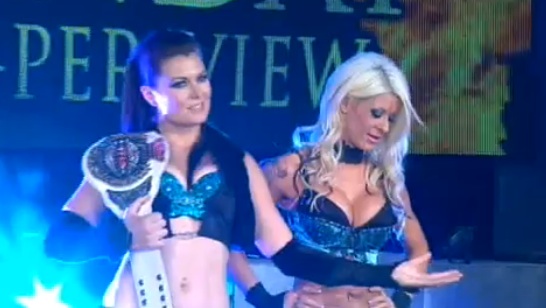 Hello again, my lovies. It has been a long week without you around and I shall tell you, I am happy this day is finally here. Last week, we got a show chock full of Knockouts action but this week, we’re coming up a little bit short. On this episode, we’ve only got one short singles match with a little bit of an abrupt end to the scene. Whereas, last week, we couldn’t blink without seeing a member of the Knockouts division. Either way, we’ve still got action to discuss and it is going to start with that singles match I mentioned. With the Knockouts Champion, Mickie James on commentary, it is bound to be entertaining. She makes her way out first in an adorable outfit, looking all spiffed up for her night off before Hardcore Justice. She struts over to the commentator’s booth and plants herself right between Taz and Mike Tenay, ready to call the action.

Out first is the “Queen Bee” herself, Madison Rayne. She’s back to wearing that awful beer wench attire, red or black is still horrid. That sash and crown are still in place and she makes no bids about screaming at the woman who took her title from her, in between waving to her adoring fans, of course. I love Madison. She is one of my favorite Knockouts ever but I really want to just take her shopping for new clothes. I mean, really, girl. We need to hit up the mall. For reals. Last to the ring, in true booty poppin’ fashion, is Miss Tessmacher. She is accompanied by her ever-the-wiser partner, Tara and they’re both displaying those new Knockouts Tag Team Championship titles with pride. They’re both looking fierce, Tara especially. Get it girl!

Tessmacher makes her way to the ring, playing it up as usual. She goes about her normal way while Tara watches in admiration until they can suck face on the apron. Oh yes. I went there. Tess, happy as a tick on a dog (redneck reference), spins around in the ring and Madison pretty much has a conniption. While Tenacious Tess is preparing to disrobe, Moody Madi’s head is about ready to spin off. This could get ugly especially since Earl Hebner tells Tara to pack up ship and sail to the back. Madison makes a giant show about wishing her well, sending her goodbyes all across the Florida coast. Talk about projection.

But while Madison is bitching at the world, Tessmacher is ready to rough it up. Not even a finger in the face can stop her from starting this match. She lays in the forearms and stomps Madison into the corner, backin’ that ass up all over Moody’s face. All the while, Mickie and Taz are talking about how to block that particular maneuver…

Back in the ring, Moody comes back with a claw to the mouth of Tenacious Tess and then slams her down in a very unceremonious manner. As if she’s nothing at all, Madison picks her up by the hair and just throws her across the ring like old laundry. Not once but twice. Moody runs off at the mouth, talking her trash and then comes off with something we haven’t seen in awhile. That leg-over, back-of-the-head humping, slam-in-the-face knee job business she does. I honestly wouldn’t know what to call it. I don’t think there is anyone on Earth that can come up with a name for it. If you do, please purchase yourself a treat.

However, in the classic slip-up, Moody Madison takes far too much time talking trash at Mickie and when she turns around, gets that old school roll-up from Tess. And she is not happy. Tessmacher barely has enough time to celebrate before Madison is on her, knocking her to the mat and wrapping those grubby paws around her throat. This is not something the champ can stand for. She tosses down her headphones and for some reason, takes far too long to hit the ramp. But it gives Angelina Love just enough time to run out from the back, clearly having forgotten to finish dressing. She was obviously trying to find the perfect outfit, ran out of time and just had to go with what she had on. That’s a valued excuse, right?

Either way, she nails Mickie from behind and slaps her face straight against the metal ramp. But bringing her to her feet is a mistake because Mickie fights back, getting one over on Angelina. That is, until Winter storms from stage right and just clobbers her. The crowd is making no secret in showing them how much they can’t stand them but do they care? Of course not. They’re all about setting Mickie up for the fall and do just that. Angelina holds Mickie’s arms and Winter, with the title, nails her Hardcore Justice opponent right across the temple.

Cue the music and let’s pretend we’re the champion for a moment in time. Only you’re not so you have to (legally) give the champion her title back. Why Angelina feels the need to keep talking smack, I have no idea. She probably can’t hear you through the pounding in her head. Duh.

I know we got a little short changed this week, in regards to the Knockouts but it was a pretty good showing. All leading up to the pay-per-view this Sunday. For those of you itching for more, check out what the champion, Mickie James had to say to Jeremy Borash about the attack after the show. She ain’t going down without a fight and from what we’ve seen from her before, you know it’s true.

Thoughts: Not a bad showing this week, despite the match itself only being about 2 and a half minutes long. But hey, we can’t have what we want every week. It all leads to Hardcore Justice this Sunday, where Mickie is taking on Winter for the Knockouts Championship. We’ve also learned that Sarita and Rosita will be challenging Taramacher in a return match for the Knockouts Tag Team Championships. So if you felt jipped this week on Impact, be sure to tune into the pay-per-view and catch the wagon full of action. I’ll be there and we’ll find out if you will too so until that time, my lovies! xoxo