Glamazon Put On Blast By Webmaster 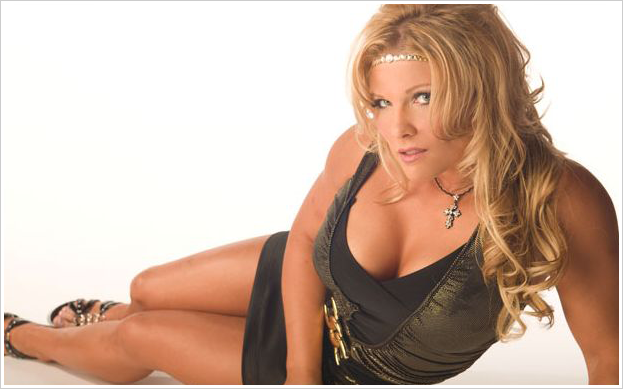 She may be the new Women’s Champion, but Glamazon, Beth Phoenix has been put on blast today by her now former official website owner. The webmaster of bethphoenixglamazon.com sent out this e-mail to many news sites recently and seeing as myself and Erin run Torrie Wilson and Melina‘s official sites, it’s time for us to weigh in!

There is some sites reporting that someone hacked the website, and placed the TNA logo there, other sites are reporting that it was just a disgruntled webmaster… tis is what happened

I was the webmaster for Bethâ€™s Official website for its entire 9 month run, and at this point Iâ€™d like to explain what has gone on. Disgruntled is only the beginning….

I approached Beth Phoenix in regards to an Official website when she was still working down in OVW before being called back up to the WWE main roster last year. I believe we launched the site sometime around April, 2007, with the full support and input of Beth herself. We spoke about how the site should be and Beth sent on some cool ideas for some video promos that I ended up making as teaser trailers for the countdown to the opening of the site.

I had told Beth that I would look after all the registration and hosting costs of the site, because I am a pro-wrestling fan, I wasnâ€™t bothered about spending some money each year to become the webmaster for Bethâ€™s official website and stay in contact with her.

She wasnâ€™t the easiest to stay in touch with, even when she was still down in OVW, but I still continued on with the site. Then some of the Beth Phoenix fansites, which may I say do an excellent job, started to get some exclusive news that I felt shouldâ€™ve been reported first and exclusively on Bethâ€™s official site. I asked why we couldnâ€™t do it through our site, and was promised by her husband, Joey, that he would now handle reporting all news etc. to me (At this point Beth had been called back up to the main WWE roster).

We done some cool stuff with Joey, his tag-team partner Robin Knightwing, and Bethâ€™s best friend, Kevin Grace, like PPV predictions etc etc. And I am grateful for their help at the time when Beth was busy on the road.

Unfortunately, once again, I was informed of new exclusive news being reported by a Beth fansite and I had had enough at this point. I was promised by Beth that she would send me on some stuff for doing the website for her for free, which I never received, when I asked about this stuff that never arrived, I received a Christmas card/photo signed by Beth, Joey & Knightwing. I was also promised that when Beth was in Belfast on tour with WWE (I live in Ireland), that she would in the least give me a phone call to say hi and thank me for doing the website, which, again, I never received that call.

I had asked Joey to send me on some photos and news that we could use as exclusives on the site, which I was promised to get, but never did, so at that point I decided to tell Joey to inform Beth the site was done, I was tired getting used while Bethâ€™s official site was getting more and more popular. We had some words through email and basically I didnâ€™t like that way I was spoken to, I was told that someone my age (Iâ€™m 2 years younger than Beth by the way) should be glad to be able to run her official website and be friends with and I quote â€œthe WWE Womenâ€™s Championâ€ – this was completely the end for me, sounded like winning a title went straight to someone’s ego!

I would like to point out that when I did originally close the website (in January, 2008), I publicly thanked Beth, Joey, Robin, Kevin and a number of OVW people who helped out during the course of the site on the actual website. You think this is where the story ends…. but NO!!

I was informed by a friend sometime around the end of January that when WWE switched to the new HD set on Raw that a logo I had created specifically for Bethâ€™s official website was being used on her TitanTron entrance.

Upon checking this out for myself I found out that WWE had stolen the logo and been using it since their very first HD broadcast in January, 2008. To say I was annoyed was a bit of an understatement!

I immediately contacted both Beth and Joey to find out if she had given WWE permission to use the logo, or if they had simply stolen it off the website. I got no reply from either. I then sent the WWEâ€™s legal department a letter informing them of my problem with their usage of my logo, to which I also got no reply. I once again contacted Beth & Joey and pleaded with them to inform me of who gave WWE permission to use my logo, and if I didnâ€™t get a reply I would be pursuing legal action against whoever I needed to take action against, to which, surprise surprise! I got no reply.

I have consulted with a number of people, including some pro-wrestlers, and was told to pursue my legal action against WWE over the use of my logo without permission, which I am currently following up.

I would just like to say that it is very annoying and just plain disheartening that after 9 months of non-stop hard work, not to mention the amount of money spent on web hosting, registration, purchasing past DVDâ€™s featuring Beth to use on the website, that I was so blatantly used and screwed over by someone. At this point neither Beth nor Joey will answer my emails, and I was told in person at signings etc that Beth is one of the nicest people you could ever meet, well Iâ€™m here to tell you that she is nothing but a total user, and the general assumption of wrestlers is that they use you until they get what they want and then drop you like you never existed.

I cannot and will not watch any of Bethâ€™s stuff on tv anymore, and until this matter is resolved and I receive an apology of sorts I will continue to tell people of what Beth Phoenix is really like.

Regarding this whole site being â€œhackedâ€ issue with the TNA logo… everyone is about 2 months off regarding this… I did place the TNA logo on the website around June, 2008, in an attempt to get Bethâ€™s / WWEâ€™s attention over this matter, whether it worked or not is another discussion. I apologize to TNA if there is any issue regarding this.

Iâ€™d like to thank everyone who spent the time to visit Bethâ€™s website when it was active, Iâ€™d also like to point out that Beth Unlimited (www.beth-phoenix.org) is the best Beth Phoenix fansite around at the moment, they do a great job over there, and beat me to the punch on news a number of times!!

Iâ€™d like to hear what some people think regarding the incidents above, please feel free to contact me at : [email protected]

I don’t know about you, but to me this definitely comes across as the rantings of a disgruntled fan. This person says that Beth used them? I would say they’re a user too, making for mutual usage. Seems like someone was trying to milk this relationship for all it was worth – I would never dream of asking Torrie for stuff or whatever, trying to abuse my friendship with her for my own gain. This person simply doesn’t appreciate how hard that these wrestlers work; Torrie worked nearly 7 days a week and you simply can’t expect her to be able to keep you up to date on everything. Beth isn’t the only one whose ego boosted…

PS: Galivanting around on the Internet with your “poor me, poor me” story only tarnishes your character, not Beth’s. I have no respect for someone who’d want to put all this dirty laundry out there, just because they’re not mature enough to handle the situation with grace and integrity.