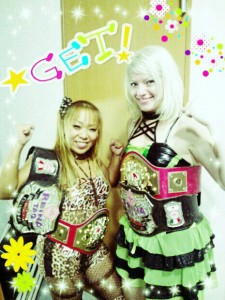 Last Wednesday’s Ice Ribbon event saw two titles change hands in the same match, as Hailey Hatred and Hamuko Hoshi defeated International Ribbon and REINA Tag Team Champions Tsukasa Fujimoto and Hikaru Shida in a match where both titles were on the line.

Fujimoto and Shida had only won the International Ribbon belts a few days previously from Tsukushi and Kurumi, and it was their second reign together as champions (though both had also previously won it with different partners). They had held the REINA belts since June.

Here are the full results (including an ICE x60 Championship match), courtesy of Open The Puroresu Gate:

Thoughts: Hailey Hatred surely must be the greatest gaijin in Joshi history now? I can’t remember her not holding a title in Japan, and she now holds SIX championships simultaneously! An incredible feat for an incredible wrestler. It’s also worth pointing out that Hailey and Hamuko now hold all but one of the belts in Ice Ribbon, with Hailey also the Triangle Ribbon Champion, and Hamuko holding the IW19 Championship. Extremely impressive stuff, and long may it continue!