Impact Write-Up (April 18th, 2013): Mickie Goes Through Tessmacher on Her Way to the Title 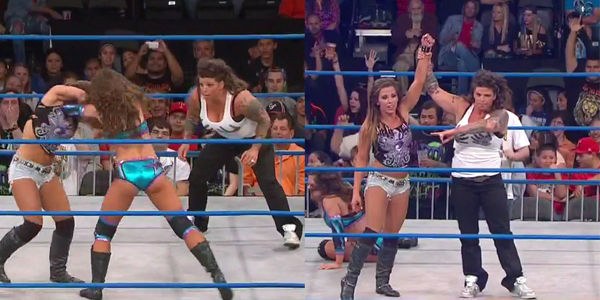 What’s up Impact fans, and welcome to the Impact Write-Up. This week we were treated to a number one contender’s match for Velvet Sky’s Knockouts championship. It was Mickie James against Brooke Tessmacher for the opportunity to face the champ, and they put on a decent showing. I’m pretty excited for this one as it includes my favourite lady, Miss Mickie James. Shall we get to it? Yes? Good.

Our first glimpse of the division comes in the form of Brooke Hogan and Christy Hemme early in the night, and they’re discussing the upcoming Knockouts website. According to Christy, the website is ready to launch on April 25th! Exciting times are ahead, my friends. It’s pretty cool that they get a website totally devoted to them. As Christy leaves, Brooke calls in Mickie and Brooke Tessmacher (it would be confusing if I called her just Brooke here, wouldn’t it?) to have a little chat before their upcoming match. She tells them she chose them for the match because their such hard workers, and they both have something special. I agree, though I do have to question the decision a little. Mickie has been used sparingly lately, and I haven’t seen Brooke since I started recaping weekly. Nevertheless, they have both worked their asses for the opportunity. Brooke also compliments Mickie’s new ‘do. She does look pretty fierce.

Before the match, we’re shown a recap of Velvet Sky’s recent knee injury. Luckily for us Knockout fans, she is on the mend. She’ll have to be if she’s to defend against one of tonight’s lovely ladies. Onto the match! Brooke is out first looking cheery and ready, followed by her opponent as Hardcore Countryyyyyyy sounds. Out comes Mickie, looking flawless. She jumps in the ring, our referee ODB calls for the bell and we are a go.

A few early lock ups pit the women in a comparison of strength. Brooke gets the upper hand originally, forcing Mickie into the corner. Mickie, unimpressed with her opponents confidence, comes back with a display of her own and gets Brooke in the other corner. They lock up once more and this time, quite interestingly, Mickie pops her foot on the middle rope for leverage. She gets reprimanded by ODB, but doesn’t look sorry about it. Hmm… I don’t know if she’s planting seeds, but I’m certainly looking forward to seeing what kind of plant might grow. Wow, let’s move on before I get even worse.

Brooke and Mickie get in each other’s faces after that lock-up, and ODB breaks it up. It looks like they’re both trying to gain favour with the ref, and she’s having none of it. With Mickie distracted, Brooke tries to capitalize and rolls Mickie up. She doesn’t quite manage a count, and Mickie takes control with some kicks to the mid-section, followed by an arm drag submission. As soon as she’s locked it in, Brooke has hold of the bottom rope. Despite being warned by the ref, Mickie isn’t breaking the hold. She’s even telling ODB to count, count, count! Well, Mickie has brought the attitude with her to this match. I love it. Brooke rolls to the outside to catch her breath. Mickie’s getting into it with ODB in the ring, and I’m sure there’s some insults going back and forth. Mickie heads back over to where Brooke is on the outside but Brooke grabs her feet and pulls her out.

The ladies trade a few hard knocks as the crowd gets into it. It’s a nice exchange, which then leads to some pretty vicious hair-pulling that the ref has to come over and break up.

We’re back in the ring as Brooke gets the upper hand. She sends Mickie into the corner and follows it up with a facebuster from the turnbuckle. She goes for a cover but only gets a two-count. As Mickie crawls to another corner, Brooke follows suit and delivers a hard clothesline to her opponent. She then decides to get a little Asstastic. Just… ugh. I have no time for this ‘move’. Mickie is horrified, as she should be. Brooke goes for another pin but gets another two count, and Mickie starts to make a comeback. She rams Brooke into opposing turnbuckles and then hits a nice one-woman flapjack. Mickie flips up (love it!) and heads to the top rope. She delivers a press from the top rope, but it only earns her a two count!

As the ladies reach their feet, they hit a double clothesline on one another and ODB starts the count. Mickie seems to be stirring first, but it’s not long before both women are on their knees and slamming one another face first into the mat. Mickie manages to fight her way out and gets the advantage. She attempts her DDT, but Brooke counters it into a roll-up. She barely has time for a count before Mickie reverses the pin for the three count! It’s over! Mickie James will face Velvet Sky for the Knockouts championship next week on Impact! Mickie looks pretty happy with herself, as she should.

Thoughts: I didn’t mind the match. I would have liked a few more spots, as opposed to the many lock ups we had at the beginning. Still, it wasn’t boring. I liked most parts of it, like the hair-pulling on the outside. I disliked others, like the Asstastic. I’m sorry, but that is not a wrestling maneuver and it really gets on my nerves. I understand why they do it, but I just hate it. Just… no.

I’m glad Mickie got the win, obviously, and I’m interested to see whether or not some of the heel tendencies she displayed in this match  will carry on to next week. I hope so… I love me some heel Mickie, and it would be a nice, fresh change. I’m looking forward to the Knockouts website, which, as Christy mentioned, has some Knockouts-specific gear on it too! Awesome!

Signing off. Eleri out!