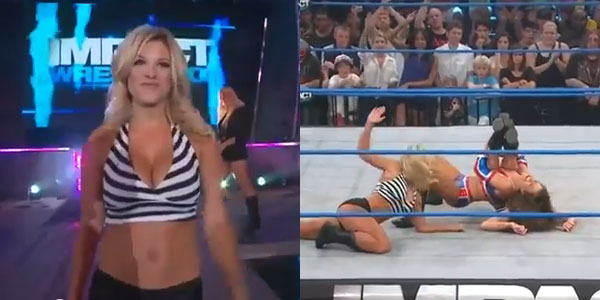 Hello there, and if you’re reading this it must be Friday unless I’m in some parallel universe. Now that I see it is Friday, let me welcome you to this crazy little thing we call an Impact Write-Up. This week, my weekly pleads for storylines and character development has seemingly been heard by the Knockouts Executive, Brooke Hogan, because she is back working with the females and has decided to give us a Knockouts Title rematch between Brooke Tessmacher and Madison Rayne. Not only that, but it will have a special guest referee as well… hmm. If you somehow skipped over the title and photo of this recap, then let us guess who ever it could be?

First up, we head to the backstage area where new Knockouts Champion, Madison Rayne has something to say. She states that this past Sunday, one of the greatest injustices in pro wrestling was solved because it’s been too long since she’s been champion. Madison continues to run down her repertoire, but she’s interrupted by a staff member that Brooke Hogan wants to see her in the ring. Madison is elated, thinking this has to be her championship celebration party, before heading off to prepare for what’s sure to be an interesting segment. Score one for character development!

Out to the ring we go soon after, to the sound of the lyrical masterpiece that fits only a true Killer Queen. She bows to all of her loyal subjects, before stepping inside the ring while holding her wonderful crown and grabbing a microphone. She invites Brooke Hogan out to the ring for such an important moment as the queen regaining her throne! Madison seems intent on getting some cake tonight, oh my. Before Brooke can come out, Madison invites Earl Hebner out to the ring as the sound of “Tessmacher” chants erupt. Earl walks over to the ring as now “You Screwed Brooke” chants break out. Madison talks to Earl like he’s her pet dog or something, but before we can see what Madison wanted to tell him, another lyrical masterpiece hits in the form of that country type song sung by Brooke Hogan that obviously is too genius to even have a name yet.

Miss Hogan walks out and tells Madison that this behavior needs to be put to a stop. She runs down some history with Earl and wonders why he can’t admit that he’s been doing some shady tactics with Madison. She informs Mr. Hebner that he’s officially done reffing the Knockouts matches, and this does NOT sit well with Madison. From there, Miss Hogan reveals that Madison will face Brooke Tessmacher in a rematch for the title tonight… and not only that, there will be a special female referee for the bout!

Madison immediately chimes in and tell Brooke Hogan that she doesn’t know who she thinks she is because she doesn’t run this show, rather Madison does! She claims that Brooke is just riding off the Hogan name, and in typical Hogan fashion, she’s all talk and no action. If she wants to come in here and make all these changes to the division, why doesn’t she come into HER ring and tell her about these changes. (Side note: Loving Madison on the mic right now.) Brooke accepts the challenge and charges after her, as both she and Earl sprint out of the ring! Brooke questions what Madison is afraid of, but out of nowhere, the Aces and Eights appear behind Brooke and back her into a corner until a few members of the male roster run down to save her.

The Knockouts Championship logo flashes across the screen as we change things up a bit with a SIDEWAYS pan up shot of Christy Hemme. Following the entrances of both challenger, Brooke Tessmacher, and champion, Madison Rayne, Brooke Hogan comes out and introduces the special guest referee… Taryn “Tiffany” Terrell! Though, the highlight of the night comes now when Taryn is entering as Brooke backs up and falls off the ramp! I don’t dislike Brooke like most, but that was hilarious. She brushes the fall off, and out walks Taryn! She dons the stripes, but in a different way than most referees. Brooke Tessmacher seems happy with this decision, as Madison looks none too amused. Taryn holds the title up as the bell sounds and we get things underway.

The two lock up as Madison backs Brooke into the corner. Taryn quickly breaks it off to the dismay of Madison, as Tessmacher does the same and Terrell plays fair. Rayne takes the early advantage with some forearms and a back elbow, before slamming Brooke into the corner and locking in a choke with her boot. Taryn gives her a count of five and tells her to stop the choking! Madison tries to go for it again, but Terrell does not back down! Madison then slams Tessmacher down and hits a nice northern lights suplex for just a two count. Brooke with a small package for a two, followed up with a jacknife for another near fall. Tessmacher misses a splash, as Madison hooks the tights in a roll up and Taryn stops it!

Madison continues to dominate the match, before missing a boot and allowing Tessmacher to hit a nice spear. Taryn begins the count, as the fans get behind the challenger and it fires her up to score with an assortment of clotheslines and a dropkick. She then hits a nice wheelbarrow facebuster for a two count as Madison fights out. Tessmacher signals for her finisher, but Madison escapes and sends her into the corner. Brooke scores with a boot, but misses a huge crossbody. Madison goes for the pin attempt with her feet on the ropes, but Taryn spies it and stops a screeching Rayne from winning. Madison begins to go off on Taryn, before turning around and right into the Tess Shocker for the win! Brooke reclaims the Knockouts Championship!

Thoughts: First of all, I’m actually really excited that Taryn has joined TNA. The whole night all I was hoping for was that the guest referee would be someone unexpected, and I don’t think one person mentioned her in their guesses. The only negative is that I don’t think anyone in the crowd really knew who she was because they plugged her by her full name instead of Tiffany. Nonetheless, I love the choice and I hope she becomes a second version of Brooke Tessmacher where no one gives her a chance at first and then she improves leaps and bounds into a star. I was always a fan of Tiffany in WWE and felt her run was cut short by personal issues. To be honest, I never thought I’d see her in a ring again, much less on TV, so it’s really cool to actually see someone you enjoyed get a second chance so far down the line from their last one. I felt the same way when Brooke Tessmacher debuted with TNA as well because I thought she had a spark in WWE that was never capitalized on, so I definitely can’t wait to see Taryn step back into the ring. It may take some time before she gets to the level she was at when training at a full time basis, but as we’ve seen with Brooke, anything can happen!

The actual match was fun to me because it told a story. You had Madison wanting Taryn to cheat for her since she’s so used to Earl doing the same, but Taryn refused and called it right down the middle. I do question if we really will never see Earl referee a Knockouts match again or if it will be forgotten down the line, and also why couldn’t this have just happened at Hardcore Justice and Brooke could have kept the title, plus a debut could’ve occurred on pay per view? Questions that will likely never get answers, but I’m going to take what I can get when it comes to TNA and be happy that the Knockouts got exposure tonight in more than just a match and that’s it. The segment with Madison and Brooke Hogan was entertaining and amusing for my own personal enjoyment. I’ve said it before, but Madison is the one Knockout they will actually give lots of mic time to no matter if she’s involved in a title feud or not. I personally have no problem with that because she makes me laugh in her segments, and the sight of Brooke Hogan running after her and Earl will forever remain a highlight.

It’s also nice to see that they finally put Brooke Hogan back in the division. I said it before, but the only few weeks this year I really enjoyed the Knockouts beyond just being able to say “that was a good match” were the few she was in charge of them. She got them time and segments, whether she appeared in them or not, the Knockouts were spotlighted more each week she was behind them. When she went off to do that Aces & Eights storyline, we went back to the way they were during Gail’s reign of really only getting one segment per show and it was usually a match and nothing else. Lo and behold, tonight she’s back in charge and we got two character driven segments with Madison, a title match, and a debut. Whether you love her or hate her, TNA seem to put time into the women’s division if she’s around them so I personally want her to be involved each week if it means more than just a match per show with no storylines or character growth.

Alright, the one big negative… Knockout Title hot potato is back. I guess I stand corrected in my Hardcore Justice recap when I said Madison and Gail seem the be the only ones who can get a lengthy title reign since now it just seems to be strictly Gail. I could say how much I despise the hot potato title switches, but I honestly enjoyed this night for the Knockouts too much to even be bothered. I beg each week for segments and character development with them, and they gave me a whole lot of it tonight so complaining about something seems ungrateful, which I am not! I probably enjoyed this episode of TNA more than most all of them this year Knockout wise, but I really hope the fun segments weren’t just because Madison Rayne had the title. You can do these types of things with every champion, TNA! Give Brooke Tessmacher some time on the mic each week like I’m sure you would have given Madison had she retained the belt. Even if it’s just a backstage segment some weeks, that’s stellar in its own right. I’m starting to gain a little faith back again, but unlike last time towards the end of Gail’s title reign where I was all “Knockouts are awesome! This is great! Brooke is getting them time and segments”, I’m going to take this week to week and not count my chickens before they hatch because all of that can go back to square one, so to speak, in the blink of an eye. Right now, I’ve got hope TNA will DO THE RIGHT THING and give the Knockouts more storylines and segments like we saw tonight, so let’s see what happens on the upcoming episode.