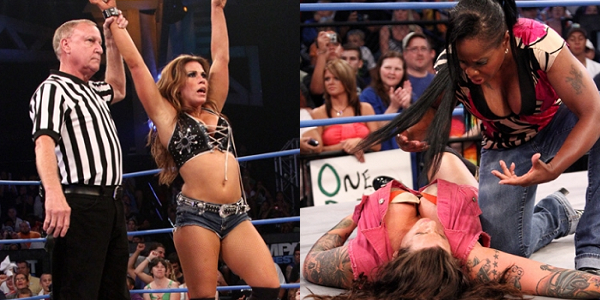 Oh lard! Has it been a week already?! I can’t even keep up anymore. I have to tell you that these Knockouts just keep coming. Once again, we’ve got a near full roster on the show and you can bet your ass it’s worth the watch. Last week, we saw a former champion take on the self-proclaimed queen bee of the division and that left us all a little disheveled. We also declared a new power couple in Impact Wrestling and they fought hard against two returning Knockouts. Those two don’t quit but I won’t even begin to go there. This week, one of those returning Knockouts is taking on someone she’s had a long line of history with but never faced in an Impact Wrestling ring. But that isn’t all, however, I never divulge all my secrets so if you want to know more, you have to keep up!

We’re gonna start things off with showing you exactly how old and skeezy Eric Bischoff can be. I mean, sure, Traci Brooks is definitely a beautiful woman and set a standard for Knockouts in TNA, but that doesn’t mean you have to stick your old ass nose all up in her feminine wiles. Come on now. The girl is just attempting to apply for a job and help you out. Anyway, as stated, a few years back Traci was indeed ‘Knockout Law’ and she did a pretty good job with keeping everyone in check. Unfortunately, that didn’t work out and TNA pretty much forgot it existed. But now Traci is back and wants her old position back as well. Will she have to pull out some special play to get it back? I suppose only time will tell but I can assure you, if the original Knockout is handed the reigns, all hell is going to come down on the Knockouts.

Speaking of hell, later on in the night, we’re backstage with Jacqueline and ODB. The whiskey sippin’, crotch grabbin’, trailer park goddess herself is set for another match this week. This time, in singles action against someone she’s known for quite some time and that stipulation of best behavior? Oh, it’s still in play. Don’t worry about that. No weave pullin’. None of those shenanigans. Yes. I said shenanigans. But once that multi-year contract is signed? Oh, it is ooonnnn!

Out to the ring, still with no music, comes ODB with her trusty flask in hand. Jackie trails her, dressed rather nicely in her street clothes. We get a little reminder of their match last week against the Knockouts Tag Team Champions, Tara and Brooke Tessmacher and how they lost. Great way to hype a new match. Just remind the person in the ring how they lost, in a sore manner, last week to prime them for a match this week. HARDCORE COUNTRY!!! Her opponent, rocking the denim and an “old school” top is Mickie James. She bounces to the ring and hypes up the crowd, who absolutely adore the multi-time champion. But love isn’t going to matter in this because ODB is ready to fight so let’s get this match underway.

Locking up, Ol’ Dirty overpowers and rolls Mickie into the corner but she doesn’t back down. Stomping back in, Mickie tries to go for a quick roll-up but ODB keys in for a wristlock with a shoulder block. However, nearly as soon as she stretches it in, Mickie cartwheels out of it. Harsh forearm shots and an escape measure, into an over the shoulder flip. Rebound off the ropes and BAM! low dropkick. I tell you that I have watched these two women for a very, very long time, which shows my age but I don’t care. It shows a lot to see them come from places like OVW to somewhere like Impact Wrestling, squaring off against one another again. Never ceases to amaze me when two careers come back in line like this. Okay. I’ll stop my nostalgia now.

Quick cover but only a two count on ODB! Blink and you’ll miss it! Knee to the midsection from ODB and a whip into the ropes but Mickie comes back, nailing her with a sharp kick. It looks like Mickie might be trying for a possible thesz press but ODB catches her mid-jump, dropping her back with a fallaway slam. And now it’s time to see Ol’ Dirty’s underoos. Cue the kip-up and ODB is all fired up! She’s got Mickie in the corner, hand on her throat and a balled up fist but Jackie reminds her not to break the rules. Gotta play it safe. This seems to only heighten ODB’s aggression and she takes it out on Mickie, even trying for a roll-up of her own. It’s no good because we all know, Mickie just doesn’t give up. But neither does Ol’ Dirty. Not at all.

She lifts Mickie up and just runs her into the turnbuckle like a freight train into a brick wall. She even looks like she wants to do so much more damage, but she stops herself. The energy seems to be draining out of Mickie James and ODB picks her up, hugging her like kids on Santa Claus at Christmas. Okay. Maybe not quite so affectionate but she’s got a grip and she ain’t letting go. Well, at least not until Mickie’s elbow drives into the back of her neck. And squeeze! No! Mickie climbs her like a freaking tree, tries to go for a sunset flip but ODB lifts her up.

ODB is pushed into the corner but turns around, charging Mickie, only to get dropped with that coveted hangwoman neckbreaker. It almost seems to take a huge shot to both ladies. DOUBLE KIP-UP! And the exchange of hands is almost ridonkulous! Both women are hard hitters and it’s like a bar fight for shits and giggles. But Mickie is the ultimate underdog and always comes back with a bite. Major left forearms from Mickie followed up by running clotheslines. The former champ is feeling the electricity from the crowd and tries to use it to her advantage but ODB isn’t having it. She holds tight in the corner and fights back, turning the tables. Guh, these two!

Mickie fights back, first with a boot to the face and then a leg-up but ODB pushes her over to the apron. A crazy blow to the forehead then an unceremonious bump on the apron and Mickie crashes to the floor. This leaves her vulnerable to Jackie’s evil. Or does it? It seems like veteran of the bunch is struggling with her inner self, knowing that Bischoff is watching the match. She messes up and they’re definitely not getting hired on. You can tell she hates herself for it. Haha. Mickie, struggling herself, slowly gets up and makes her way back onto the apron of death. She exchanges blows with ODB and finally gets an opening, going up top. THESZ PRESS! from the top rope. A kick to the stomach and an attempt at a DDT goes strangely awry when ODB counters, dropping Mickie like a pancake into a skillet. I know. I’m using so many lines tonight but I can’t help it. They fit.

Mickie is standing up in the corner but her structure doesn’t last long. Remember when I compared ODB to a freight train? Yeah. Choo. Choo. She steams after Mickie like a bull and just clobbers the hell out of her in the corner. If that doesn’t induce an asthma attack, I don’t know what will. Heart palputations. Something. The momentum has totally shifted and ODB….starts patting her crotch. Seriously? You really need to get something for that. I know a great doctor. She’ll hook you up. And probably tell you that ramming your “special place” into cushion covered metal probably isn’t a good idea. Even if it is purely recreational.

That little oversight gives Mickie the room to get out, stand up and get riled up for that DDT once again. ODB, complaining about her crotch, staggers out and gets hooked. Mickie jumps up and POP! nails her with that DDT. The hook of the legs with a cover and she has won this match, count to three. She also proved that she lives up to her motto of hardcore country, holding her own against one of the hardest hitters in the ring. Jackie, on the other hand, doesn’t much care about mottos but she knows what she has to do. She reluctantly extends her hand to Mickie, even though…she wasn’t even in the match and slaps it off. Not really helping that whole nice thing but I guess, you’re staying true to your new BFF by checking on her. Please. Talk into her that doctor. Hold her hand. Do whatever you have to do but just make her go!

Anyway, outside of ODB’s feminine issues, that isn’t all we saw of the Knockouts this week. Backstage, we get a bit of a moment with the new Knockouts Champion, Winter. She’s sitting backstage, sipping a glass of wine and basking in her own glory with Angelina Love. They’re both stroking the gold plate like it’s a precious puppy, talking trash about Mickie James. Angelina looks like she thinks Winter is a little cuckoo and then… she drinks blood?!?! I…now she’s a vampire. I think I’ve seen it all. If you want to watch it, check out the video below. It’s… special, to say the least.

Thoughts: Another strong showing from the Knockouts the week. The Mickie/ODB match was extremely physical and like I said, it was awesome to see two talents take each other on in the TNA ring. I used to watch them both in OVW, where I first saw ODB and it was always interesting to watch them. They’re both dynamic personalities, whether you love them or hate them. So it is always intriguing to see what they bring to the ring. As for Winter and her blood thirst…well, I’m just going to stay mum on that one. Perhaps Traci will gain her Knockout Law position back and put a ban on it. One could only hope. Anyway, awesome week this week but I must be going. I shall see you darlings next week! xoxo