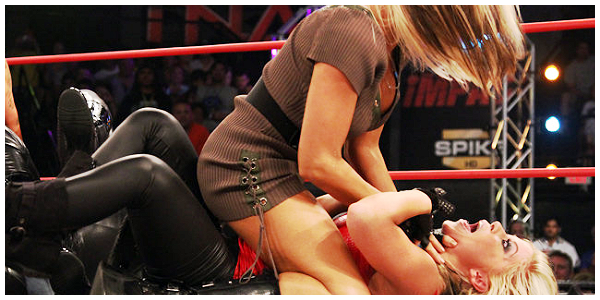 Before we even begin, I want to apologize for the severe lateness of this article. As I posted on my Twitter (@_trophyWAG), I lost my internet sometime during the morning on Friday and wasn’t able to have it fixed until late yesterday (Monday) afternoon. I’m sure by now the majority of you don’t care what happened on Impact and you certainly don’t want to rehash it, but I can’t leave a half-written piece just sitting around in drafts, haha. Anyway enjoy this shortened, super late Impact Write-Up!

On Thursday’s Impact, the ongoing saga of the Beautiful People continued but this time in the form of an in-ring segment. Angelina Love and Velvet Sky officially came together again and put their past behind them. The reunion celebration was short lived and a massive brawl ended up taking place.

Angelina and Velvet, reunited at last, both came out to the ring together this week in street clothes. They did their vintage Beautiful People entrance and I’m not sure if it’s just me, but boy was it weird to hear them get a face reaction. After a few minutes of posing and whatnot, Angelina took the microphone and the music faded out. She admitted that she has made quite a few mistakes in her life and said that Velvet has as well. But through it all, she honestly felt like the friendship she shared with Velvet was real and in the wrestling business, real friendships were hard to come by. Angelina continued on by saying that when she split from Velvet, and they went their separate ways, she felt like something was missing. Angelina made the assumption that all of us felt the same way and Velvet is quick to agree that she backs up that sentiment. That fans marked. Angelina said that she’s not always a perfect little angel and that when she wants too, she can be a pretty mean bitch. But she wants herself and Velvet to forgive and forget so  both of them can move on with their lives. Velvet took the microphone next.

Velvet basically replied that there is no sense in rehashing the past between herself and Angelina, especially with Madison Rayne running around. Velvet said that they created a monster and they should let bygones be bygones, and do what they do best – run the TNA Knockouts division together.

The original Beautiful People embraced in the ring and their music started to play. It wasn’t the end of their promo by any means, it just signaled the entrance of Madison Rayne and Tara. (I refuse to use “Mystery Woman” anymore so deal with it.) They rode out together on Tara’s bike, and both ended up in the ring. Velvet kept saying to Angelina that it was their (as in OBP) music they came out too and she wasn’t impressed. Madison got the microphone first and she said that if she wasn’t such a lady she would barf right here in the middle of the ring.  Madison told both of her former besties that first thing in the morning they would be hit with a copywrite infringement suit from her lawyers because she doesn’t want Ang and Vel Vel to ever come out to her song again. Furthermore, she doesn’t want either of them referring to themselves as the Beautiful People. Madison told everyone to look around and that she was the ONLY beautiful person in the ring. She continued her rant by saying she was all natural and called Angelina and Velvet “silicone whores.” Brilliant.

Madison went on to single out Angelina. She said that Angelina is the woman who brought her to TNA because the Beautiful People needed youth, beauty, and class. Madison said that the Beautiful People were at the end of their road and it was her influence on the ground that made them part of the main event again. With that having been said, Madison turned to Velvet. She said to Velvet that the only thing Velvet has been in TNA and will basically ever be is Madison’s little bitch.

Velvet started to beat on Madison, which prompted Tara to jump in. Angelina came right to Velvet’s defense and she just unloaded on her former rival. Tara never really stood a chance as Angelina rained blow after blow down on her. TNA security came running to the ring and broke the fight up much to the disgust of everyone in the audience. The crowd began to chant “Let them go! Let them go!” and eventually, Velvet and Angelina broke free. They pounced on their opponents and security really roughed them up this time, especially that creep who was touching Velvet. TNA promptly cut to a backstage segment with the Motor City Machine Guns which did nothing at all but annoy me.

Well this segment wasn’t bad and it wasn’t good. Madison’s promo was so screechy and loud that I sorta never want to hear her cut a promo again. It was just awful. As far as the Tara situation goes, I have to say that I’m over it. It still doesn’t make sense to me that she is working with the woman that basically drove her out of TNA, and furthermore, it’s even more ludicrous to watch this veteran get bossed around by a tiny little 20-something blonde. I feel like I’m being overly picky with this situation but it’s just gone on for far to long. I, for one, am grateful that it’s about to come to a head. I’m not going to spoil it for anyone who still lives under a rock, but yeah.

The brawl was really fun. I loved Velvet’s spear to Madison. I wish security would have just let them all fight, but maybe they’re saving the brawl for a big match or something. I’m totally ready to see the Original Beautiful People knock Madison off her high horse and make Tara wish she would have stayed in retirement. I’m also fascinated to see how OBP react to Tara’s unveiling. There’s definitely a lot going on with the Knockouts right now. It’s either good or bad depending on who you’re a fan of.