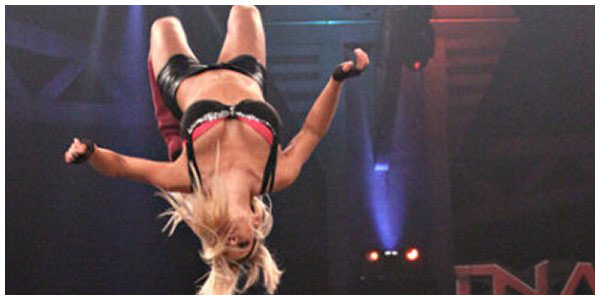 (** author’s note: To all the readers, I apologize profusely for this going up so late! My work schedule was nothing but mornings this week and it completely threw me through a loop! Hopefully the read is well worth the wait =D)

For the past few weeks, Impact has turned into the Beautiful People show and this week was no exception. As usual, Lacey Von Erich, Madison Rayne, Velvet Sky, and ex-member Angelina Love took center stage. Joining them this week was special guest star, Knockout’s Champion Tara. What did the fabulous fivesome have up their sleeves for us this week? Click the video below to watch or just continue reading if you can’t be bothered.

Before the match begins, we’re treated to an interview with Angelina and Tara. Right off the bat, Christy brings up the past history between the two former rivals and Angelina is quick with a rebuttal. She flat out admits that she didn’t care for Tara when she (Tara) first arrived in TNA. Tara takes it in stride and Angelina continues on by saying the past is the past. She brings up last week and the amazing match the two women had, then gets disgusted because of how the Beautiful People interfered. Tara mumbles “welcome to my world” but Angelina brushes it off. She says that last week she and Tara had each others’ backs and that this week it would be no different.

Christy, who’s been nodding along all this time, turns her attention to Tara and asks her if there’s a special plan to take care of the Beautiful People tonight. Tara says something along the lines of “…the plan for tonight is quite simple. It’s going to get Ugly.” A confident Angelina takes the microphone, puts on her serious face, and adds “…real ugly.” Great promo by both.

After the interview, the terrible ring entrance by the Beautiful People takes place. I’m all about flashy entrances, but they completely kill me (and not in a good way). Madison and Velvet having matching outfits is completely adorable and I really like Lacey’s boots. Angelina walks out to the ring next wearing something slightly trashy but what else is new? The girl does the trash look well and manages to make it not look disgusting like it would on most people. Finally, Tara comes to the ring. All I can do is pray for no wardrobe malfunction this week. It takes a little longer than necessary to get everyone settled but when they finally do, Velvet bravely offers to being the match against Tara. It takes all of two seconds for Tara to tag in Angelina and once that happens, Velvet is off and running. She wants absolutely nothing to do with Angelina and I don’t blame her. Angelina is one fierce mamacita and Velvet stands no chance against her!

Velvet seems to be heading towards the ramp and Angelina continues to stalk her. When Velvet sees she has nowhere to go reality sinks in. She’s totally stuck. Angelina is almost to her when Lacey comes up from behind. This doesn’t faze Angelina because she slaps the stew out of her replacement. Angelina climbs back on the apron where Madison is waiting to confront her. Needless to say Angelina doesn’t care what Madison has to say because Madison Rayne gets a boot to the gut for her efforts. While all that goes on, Velvet gets back in the ring and she starts attacking Angelina. She gets her former bestie down on the mat and begins to work her over, gaining the clear upperhand. A small “You Can’t Wrestle” chant breaks out while Velvet is offense but if she actually cares, she doesn’t show it. She happily chokes Angelina Love with the woman’s own hair. When Velvet tires of the choking, she gets Angelina in a position to whip her into the ropes. I kid you not, someone from the crowd screams “TAG IN LACEY” but that doesn’t happen… yet. (Dun, dun, duuuunnnn!)  Velvet whips Angelina across the ring, but it does her no good. Angelina knows what’s coming and attempts to go on offense. Velvet anticipates this, falls flat on her backside, and rolls out of the ring.

Velvet wants none of what Angelina’s got, and that’s fine with the Canadian. She turns her attention to Madison and starts picking on her. The pastel blue attired member of TBP is pulled into the ring by her blonde and pink locks, and is forced to eat a face full of turnbuckle as a punishment. Angelina tags in Tara and the Knockout’s Champion gets her first taste of action in the match! Tara sunset flips in, goes for the cover on Madison, but only gets a two count. Madison gets up but is taken down twice with arm drags. She’s taken down again with a suplex and Tara rolls her over into a guillotine-like move. Tara does a great job of bullying Madison around the ring with various little moves and eventually Madison has to get out of the ring. Velvet and Lacey jump down from the apron and start to comfort their fellow BP member. The Beautiful People receive no sympathy for Tara and Angelina. Angelina gets into the ring with Tara and the two women bounce off the ropes and come flying at the backs of the BP with dropkicks. All three members go flying into the guardrail and I’ll let you guess which one took that bump awkwardly. Tara and Angelina celebrate their dominance as the match fades to a commercial break.

When we come back, Tara is once again brutalizing Madison. She’s got her pressed against the ropes and lays into her with a vicious chest chop. Madison manages to reverse a whip into the ropes and Tara is the one who ends up across the ring. Lacey grabs the Champ’s boots, distracting her which allows Madison to go on offense. The Beautiful People finally use their numbers advantage and all three of them begin to gang up on Tara. Velvet gets the tag and she steps on Tara’s hair and painfully pulls the woman up by her arms. This has got to hurt and here’s hoping that Tara isn’t very tender headed. Now here is when the shock and awe of the match comes in. Velvet tags in Lacey who scales the ropes in probably the scariest moment in TNA history. The gorgeous Von Erich spawn stands shockingly still and looks out to the crowd. She checks behind her. And then…

… does a back flip. And not just a back flip. Lacey Von Erich does a back flip into an elbow drop. The Beautiful People start to mark. The Impact zone becomes a collection of dazed people wearing WTF faces. My own heart is nearly beating out of my chest.

Did she really just do that?

Lacey doesn’t seem as shocked as the rest of us and goes for the cover. It’s not a very convincing cover, and it’s not a very good count. But wow. Lacey follows up her OMGWTF move and cover by bouncing Tara’s face off the mat a couple of times. Madison tags herself in and takes over, but it’s not exactly a brilliant effort. She goes for a clothesline the same time Tara does and both women end up going down hard. Angelina is screaming for a tag and Velvet is as well. When both women make the hot tag we finally get Angelina versus Velvet again. That lasts about a nanosecond before everyone starts to get involved. Drama and action ensues. Lacey gets thrown across the ring back towards the BP corner, and Madison leaps on Tara’s back and starts to choke her out. Angelina absolutely attempts to rip Velvet’s head off with a boot right to the face and folks, Velvet Sky isn’t getting up anytime soon. Angelina goes for the cover but the stupid, distracted referee is to busy trying to get Madison off Tara to pay attention. Angelina gets a thousand count and then gets knocked into next week by Lacey and the Ugly Stick. Lacey stands there for longer than she needs too and then it dawns on her to get out of the ring. Velvet’s dead weight rolls over on Angelina and Madison releases Tara. The referee goes down and counts the pin, and Velvet Sky picks up a huge win for the Beautiful People over Angelina and Tara.

So what do I think about this?

Well, it wasn’t a bad match by any means. I basically had a heart attack when Lacey pulled off that moonsault. I was scared for her, scared for Tara, and everyone in the Impact zone, but thankfully no one was harmed, or worse… killed. Velvet getting the pin over Angelina was a nice little twist. It’s not exactly blow your mind wrestling, but what is these days? For the past few weeks we’ve gotten nothing but the Beautiful People and I’m afraid that the over exposure of all these Knockouts are going to start to wear on the fans. Where are Sarita, Taylor Wilde, Kong, Hamada, Traci, ODB? Doesn’t Daffney still work for TNA? I know Roxxi is injured, but there are other girls on the roster to pick from. Lets showcase them as well. Shoving the same people down our throats every week isn’t going to make people excited about the Knockout portion(s) of Impact.

Then again, maybe we should just feel fortunate we have Knockout action. TNA is being ran by a bunch of people who killed WCW and never ran a women’s division. I don’t know how many of you readers remember WCW but they had no women’s title. They didn’t have regular female wrestling matches. Their girls were glorified arm candy, sex objects. They got to wrestle from time to time in degrading mud matches and other stupid gimmick contests. I know the WWE uses this crap too but this is TNA. They’re supposed to be our alternative. I try to find the silver lining in all of this and there’s a nice one. I already stated the match wasn’t bad at all but we need to switch things up. Lets use some other girls or lets have, God forbid, more than one match. TNA used to be all about the Knockouts but that certainly isn’t the case right now. Instead of having useless people like Scott Hall, X-Pac, and the Nasty Boys around, the Knockouts division needs to be showcased more. It needs to be respected more. I love the Beautiful People but if I watch them on my television one more time against Angelina and Tara, or any combination of one or the other I’m liable to scream and throw my laptop at the TV.

And we can’t have that happen, can we?