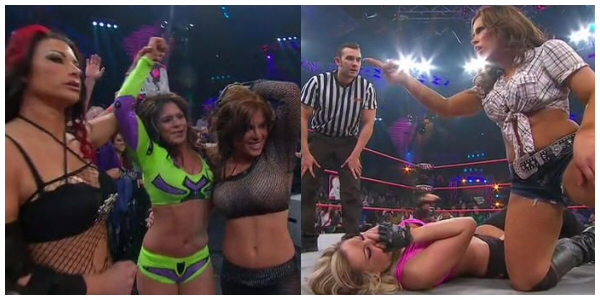 Hello there! Welcome back to the official TNA Impact Write-Up! My name is April and I will be your sponsor this week. Call me should you feel yourself in doubt of your wrestling devotion. I’ll set you straight. Last week, we saw a snappy strap match between Velvet Sky and Sarita that left us all using our imaginations. We also saw Madison Rayne in her Viera Twang dress and accent that left us all doubled over. This week, we’ve got Knockouts action in form of a rather odd pair of teams set to settle the score. Follow along, my darlings!

Out first is the team of Madison Rayne and Sarita. Madison is escorted to the ring by her bodyguard, Tara on her crotch rocket while Sarita dances her way down the ring in a glow in the dark ensemble. I’d even go so far as to say it could be from the Jeff Hardy clothing collection. Not a fan, again. At least Madison got rid of her little beer wench skirt and gold panties, changing it up with a pair of cute matching pants. Note the funny moment here where Sarita does her little salsarita dance and gets huffy when Tara starts dancing with her. Haha. HARDCORE COUNTRY! Out next is Mickie James in her country couture, daisy dukes and plaid tie-off. She is set to team with the lovely Velvet Sky who makes her way out last in black and hot pink. I like the black chaps a lot better than the others. Freelance fashion aside, two somewhat unorthodox tag teams set to face off.

Starting this match out in true bitch manner, Velvet goes straight after Sarita as soon as the bell rings. Sarita tries to come back with a clothesline but Vel Vel ducks and shoves her down, rebounding off the ropes to come back with a low dropkick. Quick to get back on it, Velvet takes Sarita down with a knee smash to the face. A few slaps to the chest and Sarita flings Velvet into the ropes which brings Vel Vel back with a headscissors roll-up. One..two..and no prize pinning combination. Sarita kicks out but Velvet flips her right back over for another attempt. Sarita does her best to come back but one half of the founding Beautiful People is hellbent on taking the latina down. I like Vicious Velvet. I think it suits her.

Tazz makes a good point, asking whether Sarita was envious or jealous of Velvet. I’ve kind of wondered that myself. Either way, Sarita manages the blonde back into the corner where Madison can get a handful of hair. This turns Velvet around so Madison can drop her throat down on the top rope. With a little celebratory dance, Sarita goes for the pin but only comes out with a single count. All the while, we hear Madison Rayne screeching at the referee and Mickie James to keep everyone on their toes. I love Madison as a performer but I’m pretty sure she should come complete with a set of ear plugs.

The first tag of the match is made and in comes Madison, rushing Velvet back into the corner. She punishes her former tag partner with shoulders to the midsection and a foot to throat choke. A distraction to the referee and in jumps Sarita, using the ropes to lay further hurt to Velvet’s throat. Out she goes before the referee can catch her and Madison is in for the pin. Almost three but Velvet gets her arm up, which gives area for a headlock on Velvet from Madison. She yells over at Mickie and backs into the corner so Sarita can tag in. Insert trash talk, petty slaps and double team efforts until Madison comes back in for her headscissors stomp. Looking for an exclamation point? What about a spit to the face of Mickie James? Mickie wasn’t happy about it either.

The number one contender storms in after the champion but, she scurries across the ring like a mouse running from an angry cat. A hasty tag to her partner and Sarita comes right back in, taking it to the fallen Velvet. The referee backs Mickie onto the outside as Sarita drops a harsh elbow to Vel Vel’s chest. She doesn’t flail long, however, because Sarita drags her back up to her feet but Velvet isn’t going to let her get the upper hand again. Obviously having had enough, Velvet turns the tables and nails a glorious jumping DDT, going in for a quick pin. The crowd and Mickie all get behind Velvet but Madison stays true, ruining the fun with a run-in interference. This sets Mickie James into action and she dives onto Madison like fire. She continues to explode on her Genesis opponent, giving her a taste of her own medicine with a knee here and a slam there. Adding an exclamation point of her own with a hard neckbreaker. Cue the “Mickie” chants here and the crowd is loving it.

The referee finally gets at Mickie, trying to get her out of the ring but over in the corner is the wild card in this match. Tara manages her way onto the apron and WHACK! That elbow brace slaps right into Velvet Sky’s nose, knocking her back into the claws of Madison. The Knockouts Champion shoves Sarita on top of Velvet and with a three count pin, the Loco Latina picks up the win for her team!

Thoughts: Not a lot of Knockouts action this week but for what we had, I enjoyed it. It was a solid tag team match. It was nice to see different people teaming up to take on their “enemies”. I enjoyed the fact that TNA actually gave Velvet the spot in more of the match. I really think she held her own and I am extremely excited for her this year. I am excited for all the Knockouts and I’m curious to see where their storylines are going.

Things are definitely going to be shaken up after Genesis because I have a major feeling we’re going to have a new Knockouts Champion. It’s coming. New Year. New Champions. I think this could lead up to a good spot for Velvet and Sarita to feud for a possible shot at the Knockouts title. It gives an actual reason behind their feud, something we still haven’t figured out. Given the commentary during the match, I’d be curious to see if an actual reason will be revealed anytime soon. Only time will tell.

I hope you all have started your new year off in tremendous fashion. I look forward to spending it with you all here on Diva Dirt. I also hope that next week bring much more Knockouts action. Until we meet again, sweethearts, may you all be blessed with gummy bears and ice cream! Much love!