Impact Write-Up (July 18th, 2013): Mickie Crunches the Numbers, but Gail Ain’t Got Time For That 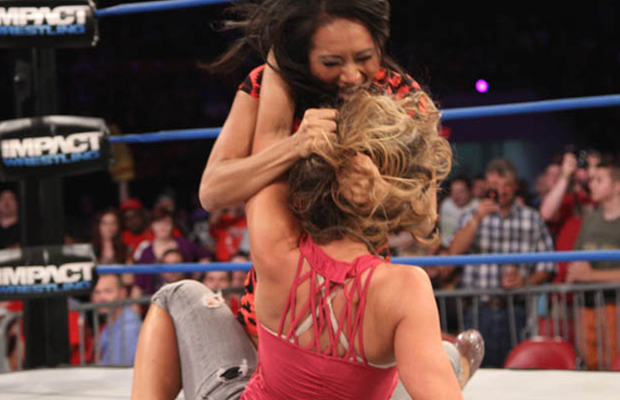 Welcome, Knockout fans, to this week’s Write-Up. It is so hot over here in the UK right now and as I write this at nine in the morning, I’m already practically melting. Do not like. So last night, we got a promo between Mickie James and Gail Kim, hyping the fact that Gail is the new number one contender, and generally giving more of Mickie’s wonderful heel turn. I’m loving it.

The segment kicks off with Mickie already in the ring. She begins by saying that last week was a moment that will live in Knockouts history forever. It set the standard – no! – it raised the bar for women is this industry all over the world. She could go on and on all night, but she’s a gracious champ she’ll just show us instead.

We cut to footage from Mickie’s concert in Music City. She’s talking about the hoards of people there to see her, and how this kind of moment is what resonates with people for the rest of their lives. She compares it to the moon landing and the invention of the Twinkie, and says everyone will remember the day the heart breakin’, history makin’ Knockouts champion made Music City Mickie City.

We’re back with Mickie in the ring. She looks gorgeous, by the way. She’s talking some more about herself, dubs the footage ‘cramazing’, but is soon interrupted by the arrival of Gail Kim. The self-proclaimed greatest women’s wrestler ever makes her way out to join Mickie in the ring. Gail, I’m not loving your choice of dress but I forgive you because you’re awesome.

Gail says Mickie is delusional if she thinks anyone is talking about her ‘stupid little performance’ last week after Gail made history in her ladder match against Taryn Terrell. Mickie looks so offended. Gail says the only thing that will make ‘this package more perfect’ is when she gets the title back… next week? That was fast. Mickie comes back with the fact that there is a clause in her contract, stating that she needs a certain amount of time and oxygen before she can compete at optimum level, and right now ‘honey, you are invading both of them.’

Mickie grades Gail’s match as a two, maybe a two out of five, whereas apparently all the newspapers, the music magazines etc say that Mickie’s performance was a five star one! Mickie attempts to slap Gail but Gail dodges the bullet, only to land one right to Mickie’s jaw, knocking the champ down. Oh, Gail’s shoes are off and the claws are out as Mickie tackles her to the mat and they brawl! The refs are in to separate the two but Gail breaks free and goes for Mickie again. Mickie takes herself out of the equation as Gail remains in the ring, flanked by the two referees. We’ll see these two go at it next Thursday for the Knockouts title.

Thoughts: I love both these ladies, I really do, especially Mickie whose been so interesting since she’s turned heel, but I still feel this segment was lacking something. It was okay, but it needed something and I can’t put my finger on what it was. It was a solid showing between them; perhaps my issue is that they’re having the title match as early as next week, leaving little to no time to build anything much between the two of them. I like the direction Mickie’s character is taking. I could see her going the full blown celebrity route. We’ll just have to wait and see.

On a different note, what on earth are TNA thinking in releasing Tara? I think they’re mad.

See y’all (I can’t pull that off) next week! Eleri out.