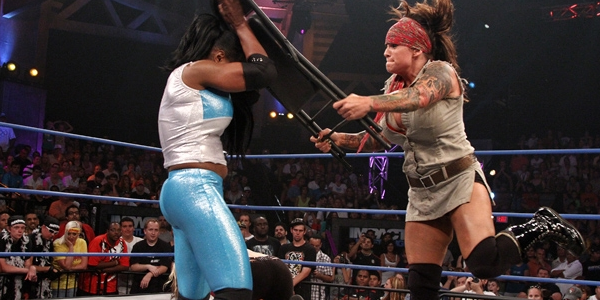 This past week flew by, didn’t it? Or am I imagining things again? Who knows. Hope everyone had a happy 4th of July weekend. I enjoyed my three days off. Anyway, last week, we got a full showing from pretty much all the Knockouts in a six Knockout elimination style tag match. But this week, we’re focusing on just a few. In recent weeks, a pair of roughneck has-beens have been terrorizing the Impact Zone, with one Knockout in particular in their crossheirs. This week, however, that Knockout has a shot at vengeance. Even if the odds aren’t in her favor, she still has a hell of a lot to prove and with the strong stipulation on the line, you had better believe they do too. Will the two “old bitties” get booted out of Impact Wrestling for good or will they live to terrorize another day? Only one way to find out. Just keep on, keepin’ on.

Backstage, Velvet Sky is fired up for her match this evening, even if it is for….a handicap match. I wouldn’t be all that excited about it but hey, to each her own. Regardless, she seems ready and I can’t completely blame her. She has been the target of her opponents for weeks and this gives her a chance to finally get her retribution. She says that tonight’s match means everything in the world to her. Gone are the days that she is the target for every Knockout that has an issue. She’s not taking shit from anyone anymore and even if she sounds like a total bitch, she tells us that we can add smarts to the list, as well as being beautiful. Those two idiots signed up for this stipulation that if they lose, they’re gone forever. Oh so very true.

But whatever the case, Velvet is going to cleanse Impact Wrestling once again. This time, it is going to be two ugly hogs at a time. BAM!

Out first, from the side and with no music at all, come the team of ODB and Jacqueline. ODB tells us all that they’re not going anywhere but I have a hunch that they just might. Next to the ring is the last standing Beautiful People member..or at least, it’s her music. It seems a little more stalled than usual so ODB takes it upon herself to wipe down the middle rope, step over it and begin humping. She wiggles her ass and points at it, mocking Velvet and taunting the crowd. Meanwhile, Velvet Sky runs out from the back with a steel chair in hand and nails Jackie from behind. Then she kindly asks ODB if she wants some too, slamming the top into her midsection. Well, at least she included her in the festivities.

Velvet, ever so rambunctious, tosses the chair down and gets in the ring, demanding the official to ring the bell. She starts in on ODB, slamming her into the corner and taking her to the other side, chest chopping her against the ropes. Give it a rebound and ODB bounces off, getting a nice running clothesline takedown from Vel Vel. She is on it, you have to give her that. Back into the corner and Velvet lays the boots to one of her opponents, working her around the ring. She looks like she’s actually having fun and well, I would be too. She works each corner and is just taking it to ODB. Back and forth body shots, charging clotheslines and finally, a running faceplant out of the corner. Velvet is hyped up and it almost looks like she could take this match early on. But, naturally, Jackie has other plans as she comes in from the outside.

A shot to the head from behind and the crowd is just not happy. But Jackie doesn’t care and she goes back after Velvet, tossing her across the mat by her hair. Fierce and full of attitude, no matter her size, Jackie has always been one tough bitch. She smirks at her antics and picks Velvet up, going tough with those left hands. She sents her into the ropes and goes for a clothesline but Velvet ducks, coming back with one of her own. A pickup slam and we have our first pin attempt of the night but ODB flies across the ring and tackles Velvet like she’s in a game of football. What the hell was that?!

ODB picks Velvet up by her throat and tosses her into the corner but misses the knee, slamming it right into the turnbuckle when Velvet ducks away. This gives Velvet a chance to fight back, working ODB in the corner again. But the numbers game comes into play and Jackie comes from behind, knocking the blonde down to the mat. She works her across the ring and we’re reminded how tough Jackie is with Taz remembering when she used to beat the asses of many men, back in the day. Oh we know, Taz. We know.

Multiple left hands to Velvet and ODB is back on the apron, only to get a tag back into the match. She takes Velvet back to familiar territory against the turnbuckles, giving her a chest pop of her own with a forearm. She slaps her around and Velvet tries to fight back but it’s no good. ODB muscles her over to Jackie, tagging in the fresh body for a double team. They look to go for either a suplex or a flapjack but Velvet surprises them with a kick to ODB, taking Jackie down with a clothesline. Not bad for someone who is looked at as the weak link, hmm? She even rolls out of the way when ODB goes for an elbow drop, jerking up that funny bone.

I’m pretty sure that Taz just called Jackie….Yackie. Did anyone else hear that? Haha.

All three women are slowly up at the same time but Velvet is the first to throw an arm. Back and forth between her opponents, trying to build that momentum back up but she gets shut down like a bankrupt convenient store. Jacqueline stays on her, holding her arms while ODB goes to the outside for that chair we saw earlier. She goes for the swing, in spite of the referee and Velvet moves out of the way. WHACK! ODB drops that chair right across the skull of her partner, knocking Jackie down. She can’t believe it and frankly, I’m laughing my ass off. And so is Velvet but she takes advantage of the situation, kicking ODB to the outside. Jackie staggers to her feet but Velvet grabs her and nails her with that spike DDT. Straight into the cover and Velvet has done it! She snags the three count and boots those two ugly hogs right out of Impact Wrestling for good! She wastes no time in motioning for them to get the eff out but ODB, never one to take kindly to being overdone, tells her she ain’t gettin’ rid of her. She slaps her crotch and tells her to kiss it. Oh so classy, B. I mean, really.

Either way, Velvet has proven herself in this handicap match so kiss that. BAM!

Thoughts: Great showing from the Knockouts involved this week. Even if the match was only about 5 and a half minutes long, it was very consistent and I watched it all the way through without getting sleepy. That doesn’t always happen, as you well know. I think it plays into the “victim coming back strong” plot but regardless of storyline, Velvet really showed how far she’s coming in the ring this week. I don’t care what anyone else says. I haven’t always been a Velvet fan but in the last year or so, she’s grown on me. She’s really honed her craft between the ropes and I can respect that. I doubt this is the last we see of ODB, but I can’t say for sure that Jackie is going to be permanent. I can see her taking the high road on this one. ODB, however, doesn’t even know how to get there. Next week, we’ve got another major match coming up between two rivals and I’m excited for it so until that time next week, my lovies! xoxo