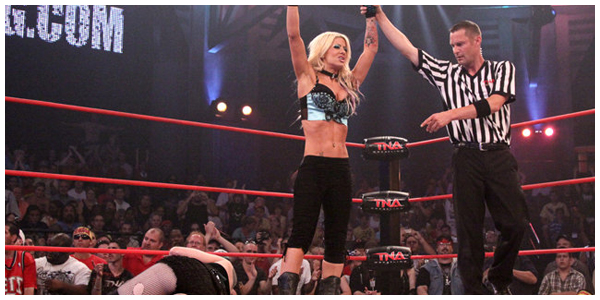 Last week on Impact, Knockouts Champ, Madison Rayne, faced off against Taylor Wilde in a match that was overshadowed by several superficial things and a very memorable backstage brawl. Angelina Love would end up getting involved and you had the makings of a really decent Impact. This week, the shoe was on the other foot as Angelina got into the ring. She took on Diva Dirt favorite, Daffney, in a lopsided match and stipulations were placed on this Sunday’s championship match. Post-match promo hilarity ensued and there was no follow-up to the Saritaylor falling out. Oh well.

To kick off our Impact coverage tonight, everyone’s favorite goth queen, Daffney, is in the ring and she’s set to take on Angelina Love, the number one contender to the Knockouts Championship. It’s nice to see the crowd react so warmly towards Daffney, and Angelina’s reaction is just as nice. After Angelina completes the posing portion of her ring entrance, the two femme fatales begin to stare one another down from opposing ends of the ring. As soon as the bell rings, both Knockouts lock-up and Angelina immediately takes control by working over Daffney’s wrist. Zombie Hot is able to turn that in her favor in almost no time but Angelina no sells the armbar and slams her knee into the gut of her opponent. Daffney doubles over in pain, but she doesn’t release the hold, so Angelina does it again. This jars Daffney’s grip and Angelina is able to whip Daffney into the ropes and take her down with a clothesline.

Daff bounces back to her feet, but Angelina just knocks her down for a second time. This time, Angelina pulls Daffney up and locks her in a side headlock. Daffney attempts to fight out of this with a few elbow shots to Angelina’s stomach, and she gets sent to the ropes. She comes flying at Angelina but the crafty, blonde Canadian sends the Scream Queen down once again with a flying spinning heel kick. Daffney is very slow to get to her feet, but when she does, she manages to send Angelina across the ring and towards one of the opposite turnbuckles. She charges forward, but Angelina is waiting on her and catches Daffney with an elbow. This sends Daffney reeling and Angelina once again pounces with a pretty standard headlock.

The crowd is solidly behind Daffney at this point (who has gotten in very little offense) and she manages to break up the headlock by turning it into a jawbreaker that nearly takes Angelina to the mat. Daffney crawls to her feet and the minute she does, Angelina forgets her jaw is hurting and slams Daffney down. Angelina motions for her foe to get up and when Daff obliges her, Angelina scoops her up and slams her down again. Once again, Daffney gets back to her feet and this time, Angelina decides to put Zombie Hot out of her misery. Daffney ends up killed and Angelina gets an extremely easy victory. The post match celebration is cut short by Angelina herself because she motions for the sound crew to cut her music and she gets a microphone.

Angelina smiles sweetly and looks into the camera. She says that Madison Rayne is probably watching at home since she doesn’t have the balls to be there in person. Angelina continues on by saying that in three days time, at Victory Road, she will become the first ever four-time TNA Knockouts Champion. Before she can continue, the Beautiful People’s theme music hits and the champ herself makes her way onto the stage. Madison has a microphone and she tells Angelina that she wants to know what she (Angelina) is willing to risk since Madison is putting her championship on the line. She wants to know if Angelina is going to put her implants on the line or perhaps, her cheap trashy weave. Angelina is highly amused that Madison brought weaves into the conversation and the rest if the world probably is too. Madison finally gets the idea that Angelina should put her career on the line.

Both girls speak Canadian for a few minutes before Angelina agrees to Madison’s request. Madison is happy about the turn of events and she goes to walk away. Angelina stops her and says that she had a feeling Madison may try and pull something like this, so she went to the championship committee earlier that day and received a special stipulation. The stipulation is as follows: If at any time Lacey or Velvet get involved in the match on Sunday, then Madison will be disqualified on the spot and Angelina will be handed the Knockouts Championship on the spot. Madison takes this news very well and turns her back, walking away. Angelina is full of confidence and the scene fades to a shot of D-Von Dudley.

Impact was a very blah show, and there was no Desmond/Chelsea drama this week to report. The Daffney/Angelina match was pretty bad for Daffney fans, but those who are Team Angelina were no doubt happy. TNA more than likely wanted to book their number on contender strong heading into the pay-per-view and if that is truly the case, then mission accomplished. Daffney was used as a jobber on this particular night. The match wasn’t great anyway. It was slow and a bit sloppy. The timing was definitely off and neither woman really shined. They simply went through the motions and Angelina won.

The post match promo between Madison and Angelina was laughable to say the least. It was badly written from a theater person’s perspective and terrible that Madison actually had to dis another girl’s hair. Some things just shouldn’t be done and Madison ripping on Angelina for her “bad weave” is just one of those things. At least both girls sounded confident on the microphone. Angelina is always good, but Madison has stepped it up in recent weeks. The usual stipulation of career versus title was added, but this time it has a twist and chances are, we could all be in for a swerve come Sunday.

The path to Victory Road was set-up nicely (despite said horrible writing) tonight and it will be fun to watch Madison and Angelina finally go at it when everything is on the line. Mediocre effort for Impact, but nice job to both girls who were given little to work with.