Impact Write-Up (October 4th, 2012): Tara Inches One Step Closer to Bound for Glory, Even Using Her Own Partner To Do So 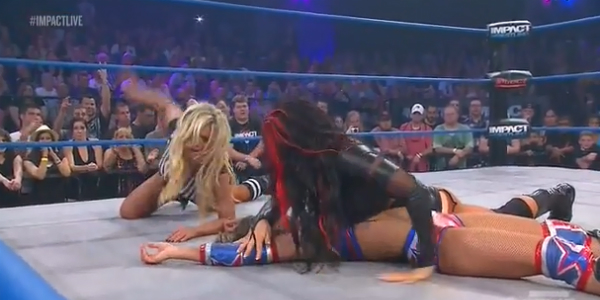 Salutations all, and welcome to this week’s Impact Write-Up. In our continuing quest to Bound for Glory, we’ve been granted a tag team match this week… In fact, it’s the exact one I said I would have rather seen taken place last week! Knockouts Champion, Brooke Tessmacher teams up with ODB to take on Gail Kim and the top contender for Brooke’s said title, Tara. But instead of just having a match, we also got some interesting moments between Gail and Tara, both towards the end of the bout and in a backstage segment. Without any further ado, let us begin!

Backstage, we see Tara talking to her Hollywood boyfriend on the phone… asking why Stacy and George canceled on them! She says she read on a gossip site that they’re “totally broken up”, noting that those kinds of sites are always, always true! (Side note: I love Tara in these backstage segments.) Suddenly, Gail Kim walks up to her and informs Tara to focus on the match! Instead, Tara wants to plan a Bound for Glory celebration dinner with her boyfriend, Gail, and her cable star man! Gail tells Tara that the only thing to be concerned over is the fact that if she wins at Bound for Glory, she’s got Gail to worry about next! Tara shrugs it off and asks herself what Torrie and A-Rod are doing, before skimming through her phone to find out!

Out to the ring we head, and following a long… slow… insanely close pan-up shot of Christy Hemme, (seriously are they zooming or standing one inch in front of her?) all four women make their grand entrances for the bout. Taryn Terrell stands in the ring ready to do some officiating, as Brooke poses with her title and the opposing team seem to argue a bit about who will start things off. Gail charges forward to ODB, but ODB’s chest seems to strike some pain into her. ODB lifts her up into the corner, before running up with a splash and going for the B-A-M! Gail escapes out the back though, but ODB still takes the control with a shoulder block and a bodyslam. Tag into our champion, who dropkicks Kim into the corner and prepares her backside for some Ass-Tastic!

Now ODB in, as she goes for a bronco buster to no avail. Tara tags in, and ultimately is the one to feel the bronco buster! Tara throws her into the ropes and goes for a dropkick, but ODB holds on and knocks Gail down from behind. This allows Tara to take control of her opponent, as Gail tags back in. She applies a brief leg choke in the corner, before scoring with her running side crossbody in the opposite side. Tara begs Gail to tag her in, but Gail shrugs her off and takes ODB down with a clothesline for a two count. Tara decides to blind tag herself in and attempts the standing moonsault, but ODB gets the knees up and tags in Brooke Tessmacher!

Brooke now in with some shots to the face and a series of clotheslines, before scoring with a beautiful headscissors takedown and a fist to the face. From there, she faceplants Tara from the corner, but Gail breaks a pin up. In comes ODB to spear Gail to the outside, but Kim ends up taking her down instead. Gail runs up from behind to attack Brooke, but Tessmacher moves and she nearly collides with her partner! The two stop before hitting each other though, and instead, Tara throws Gail into Brooke as a distraction and then drops the champion with a Widow’s Peak for the victory!

Thoughts: Really awesome match between the four ladies. I liked this a lot more than last week because it built up the Tara and Brooke feud, and also gave us some interesting tension between Gail and Tara, who I always love to watch compete against one another (more in the future please!). The action was great, the time given was great, and what really interested me was Gail Kim and Tara’s interactions throughout the night. It seems like there could be something brewing for them, maybe even leading to a triple threat feud down the line? That’s something I would personally love to see. What I really liked was that Tara and Gail didn’t just act smiley and friendly now that Tara is a heel, because those two do have a past together, even as recent as back in April, and it would have been weird to see them friendly towards one another just because Tara and Brooke now have beef. Showing them not on the same page was excellent and I look forward to what we get to see next week while WE inch closer and closer to Bound for Glory.