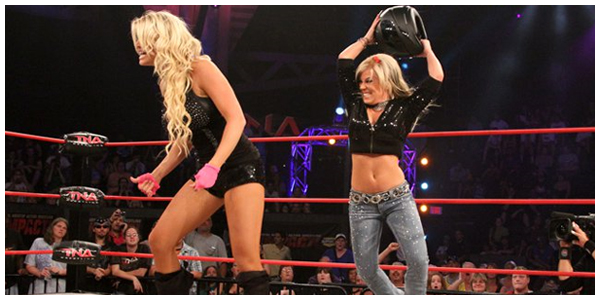 It’s that time again! Time for our weekly dose of TNA Impact! What will those wacky Knockouts be up to on this edition?  Will Tara and the Rayne bring the pain, or will the Beautiful People (now with extra added Lacey Von Erich!) find some way to thwart their dastardly schemes? Perhaps some gold will switch waists? Lets find out!

We see Lacey Von Erich walk into the makeup room where the original Beautiful People – Velvet Sky and Angelina Love – are already there, chatting amongst themselves. Lacey sits down and looks deep in thought (I’m refraining from cracking a joke here) until finally Velvet asks if she’s okay. At that… the youngest Von Erich EXPLODES. It’s a beautiful rant, made more perfect by the F-bombs Lacey throws out there. Brings a prideful tear to my eye. Go ahead, listen to it. I’ll wait – there’s no words that can do it justice.

Done listening? Good, didn’t I tell you it was a wonderous thing? To top it all off, Lacey storms out, leaving Velvet and Angelina stunned (putting it mildly there).

Velvet comments she has never seen Lacey go off like that. Neither have I…it was tremendous! It looks like she will be teaming up with Velvet Sky to challenge for the Knockout tag straps tonight. Hmm…

Out first are Lacey and Velvet, Lacey sporting a black outfit while Velvet is in her usual skirt and shirt. Next out is Taylor Wilde and Ayako Hamada, and cheeky Hamada twirls and smacks Taylor once again. This is just a hint of the playful side of Hamada that TNA is (finally) allowing her to show! The pair make their way to the ring and after a friendly hug between Hamaylor, it’ll be Taylor and Lacey starting out (after much pleading from Lacey).

The two lock up and surprisingly enough, Lacey takes Taylor over with a nice modified arm drag. Taylor’s back up and trips her with a drop toehold, floating over for a headlock. There’s an attempt for a pin but Lacey doesn’t stay down. Taylor laches back on with a headlock but after some forearm shots, the hold is released and Lacey gets a nice hip toss on Taylor. Deciding discretion is the better part of valor, Wilde tags in Hamada, who gets a hip toss and a very nice arm drag for her trouble! Keeping a firm hold on the arm, Lacey scoots over and tags in Velvet, who hits an overhead club from the top rope on Hamada’s arm. Velvet attempts to keep control but after a reversal, Ayako hits a hard running boot to Velvet’s face! However any advantage she has is lost after Sky avoids a perfect moonsault. Vel-Vel follows up with a good dropkick to Hamada’s chest, which sends her to the corner to tag in Taylor.

Velvet attempts a running clothesline but Taylor avoids and goes for a quick rollup. Velvet rolls through, and a small package then a backslide pin follow, each by Wilde and Sky respectively. Neither gets a three count, so Velvet switches to offense, dropping several running elbows before tagging Lacey back in. A small “Lacey!” chant breaks out in the crowd,  but very quickly the poor Von Erich finds herself taking kicks from Taylor as Hamada tags herself in. The two get a double team suplex on Lacey, but she manages to kick out of the resulting pin. After a beautiful enziguri and a fisherman’s suplex into a bridging pin, Lacey again kicks out. She can certainly take a lot of punishment! Ayako brings Taylor back in, who unleashes some quick kicks as well as a hard clothesline to bring Lacey down. Another pin gets another two count. Not gonna lie, Lacey’s really impressing me with her ability to take a beating!

There follows a spot in the corner that makes me grimace, and I’m not even sure how to describe it, but Lacey goes for a cover that Hamada breaks up. Velvet enters the ring and takes Ayako down with a running bulldog, and we’ve got chaos in the ring! Taylor pushes Velvet out of the ring, but Lacey winds up pushing Hamada out of the ring – right into Velvet, knocking her back down! But as Taylor looks to recover, Lacey’s ready to pounce but what’s this? Madison Rayne comes out of nowhere, rolling into the ring and striking Lacey down with Tara’s huge helmet! The referee sees nothing as he’s outside with Velvet and Hamada. Madison makes her getaway, ducking outside and huddling near the side of the ring. We look back into the ring and…Lacey’s already back up? Huh? In a split second, Taylor connects with a nice kick to Lacey’s head. The referee counts three – this one is over with Hamaylor keeping the belts around their waists!

The two celebrate even as Madison stands up, revealing her presence to them all, a mocking grin on her face. Lacey’s selling the kick to the head and Madison’s presence brings out Angelina Love, who rolls into the ring to first check on Lacey. Furious, she rolls out and starts towards Madison, who ducks to the back, making good her escape. Love focuses back on Lacey as a recap of the finish plays. Fade out.

Minus that spot in the corner between Taylor and Lacey, and Lacey no-selling the helmet to the head, I was impressed by Lacey in this match. Her arm drags were fluid and she stuck to the basics. Her acting is her best feature, the promo was awesome. She came across as believable, the pissed off former friend seeking another shot to prove she can be a winner. Although once they lost, Velvet and Angelina were a helluva lot more sympathetic than Madison and Tara had been. I like the addition of Lacey into this feud, it’s expanding on her character and she’s also evolving in the ring as well. To be honest, however, I’m not sure how much longer they can drag out this feud.It’s been on-going since the start of the year and we’re almost into October. One wonders if the recent signing of Mickie James will alter this rivalry, and if so in what manner.

Me, I’m happy to see Hamada and Taylor Wilde on my television again. Now if we can just get Daffney on there as well, I’ll be as satisfied as a Cheshire Cat. One step at a time…