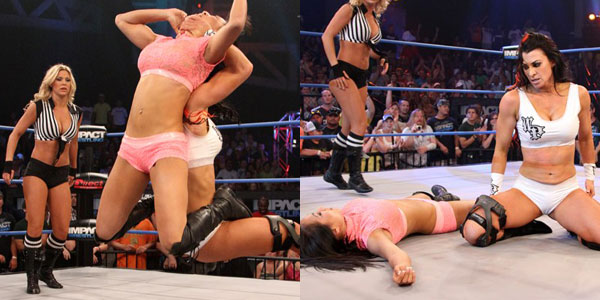 Hello everyone, and let me be the first to welcome you to this weeks Impact Write-Up. There will be cookies to your left and water to your right, so please enjoy the stay! This week, the Knockouts action was a bit smaller than they usually get, but that doesn’t mean it didn’t compare to their standard just as well! Gail Kim met face to face with Tara, both in the ring, and in a backstage segment with Brooke Hogan. No sight of our champion, Miss Tessmacher, Madison, or ODB, but Gail and Tara are ready to fight… and fight do they ever! Check it out below:

Backstage, we spot Brooke Hogan and Tara! She informs the Widow’s Peak Freak that she was very impressed with her match on Open Fight Night against Miss Tessmacher. The only thing, though… she wants to see it again. YES! Brooke wants to make sure that the “teacher deserves the diploma”, thus she announces that Tara and Tessmacher will face again this Sunday at No Surrender. Brooke talks about bringing in Taryn Terrell to help make sure no sleazy referee job was taking place, but before she can finish, Gail Kim interrupts the scene! She gets up in Brooke’s face about pushing the true talent away in favor of eye candy. Oh God, Gail, you’re reminding me of that horrendous day in 2004 when we lost you, Jazz, and who I feel is one of the most underrated women ever in WWE, Nidia! I still never got over that, but that’s for another day and truthfully I just wanted an excuse to mention Nidia. Anyways, Gail continues to scream at Miss Hogan, so Brooke decides to book a match between she and Tara. Before we can even process this announcement, Tara and Gail are already up in each other’s faces talking trash. I love it! Making matches seem important and not just throwing them out there. Thumbs up, TNA.

After a commercial break, we head to the ring with the intro of Knockouts referee, Taryn Terrell. We then spy a pretty sick new titantron for Gail Kim, as she executes her signature poses and I now get upset that I have no clear version of her new lyriced theme that I’m pretty much addicted to. Following her comes the Widow’s Peak Freak, Tara! Tara looks all business tonight, but cracks a smile as she poses for her fans.

Taryn calls for the bell, as the two lock up and Gail scores a headlock takeover. Kim breaks it off and hits a nice flip armdrag, then a dropkick! Kim taunts the fans, before turning right into a punch. Tara with an armdrag, before sending Gail off the ropes and hitting a huge back body drop! Tara tries to capitalize, but Gail hits a flying armbar and continues the assault to the sound of “Tara” chants. Kim with her flying corner side crossbody move, then following it up with a boot to the back of the head. She now chokes Tara out inside the ring and doesn’t let up from her dominance, but Tara quickly gets a roll up for a two. Gail doesn’t let that brief moment take her off her game though, as she refuses to let up. Tara manages to connect with a huge powerslam though, and from there, the rest is all Tara with a few smacks and clotheslines to take the former Knockouts Champion down. Tara with a stalling suplex for a two count, as Gail kicks out. The Number One Contender goes for her moonsault, but Gail grabs her by the ankle and drops her on the ropes. Kim then heads up top, but Tara cuts her off and hits the Widows Peak! One… Two… Three! Tara defeats Gail in a hard fought Knockouts bout!

Thoughts: As always, the Knockouts put on another great match. Tara and Gail never fail to amaze me together, and they sort of remind me of the TNA equivalent to Natalya and Alicia Fox, where I feel like all of their matches shine and they seem to have the best chemistry of their respective roster. I felt both worked well together and could do so much in a program together. In fact I still stand by saying their match earlier this year at Against All Odds is my favorite female match of the year so far.

I also loved the segment backstage! Impact Wrestling is seemingly listening to my pleas for more promo and mic work with the ladies. I’m bummed that Brooke Tessmacher had no appearances, but I love that they’re allowing different women the chance to have confrontations, especially Tara and Gail. They made their match more than just, “Oh, this is taking place because these two are here and we booked it.” It had meaning behind it, which in turn, made it feel more important and valuable like anything could happen. Overall, a great showing, but definitely wish it was given a few more minutes. Still, that didn’t take away from my enjoyment at all!

Now onto the bigger story going… TNT! I’m really excited as to where this COULD go, and I emphasize that because Impact is known for it’s… unpredictability. I’ve had so many hopes for a TNT feud ever since Brooke became champion, and they are doing it right so far in allowing them to face, first as friends, and now with the title on the line. Tara is going to enter this match differently, and a lot less buddy-buddy when the title is up for grabs. I want this upcoming match to be a factor in what will eventually cause a split between them, but Brooke has got to retain in my opinion. I think a win by roll up would even be the best case scenario because she beats her veteran teacher, not cleanly so there’s still something fresh left for their blow off match, and Tara can sort of build that rage as in she just got upstaged by the woman she trained on the big stage. Then I would have frustrations build over the following weeks on Impact and maybe have Tara snap at Bound for Glory, or even a little before that on an episode of Impact so that Brooke and Tara’s match can take place at what is known as TNA’s “WrestleMania” type pay per view.

I have so many hopes, and I pray that they don’t come crashing down with hot potato title switches, but I’m optimistic in that I hope they are really going to go for it this time in terms of a huge feud. The story is already there due to the two having a past together, you just have to take it step by step through the transitions! No matter if it’s had one week of build, two weeks of build, or two months of build, the match announcement makes perfect sense because of Tara’s win over Brooke in their “friendly competition” bout, so it doesn’t feel as random as it could have. Now I just need them to DO THE RIGHT THING and spread this TNT feud out carefully to not hurt what could essentially be a story that could set the Knockouts division back to the types of levels it was at those years ago. You can do it! I have faith in you, Impact!