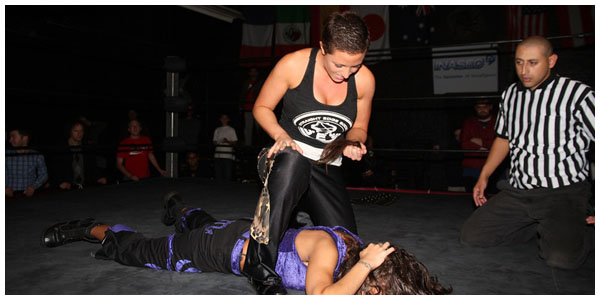 Here are the pictures from the big angle that was filmed this past Saturday night at WSU’s second taping.

Former Straight Edge Society Diva, Serena — who we were used to seeing as a crowd favorite in SHIMMER — became Rihanna’s favorite Diva by going bad and hacking off a lock of WSU World Champ, Mercedes Martinez‘s hair.

Serena made her debut for WSU on Saturday night live on iPPV, defeating Traci Brooks. On the second taping (results here), she won a four-way match to become #1 Contender for the WSU World Championship. That match will take place on March 5th, 2011 at WSU’s fourth anniversary show.

These scenes will soon be available via taped iPPV and on DVD.

Check out the pictures below.