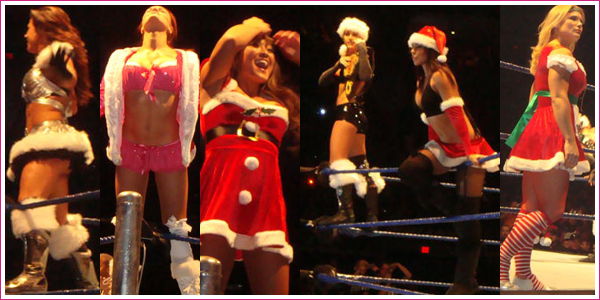 The Divas of SmackDown [and ECW] have been ‘Santa suiting up’ [bonus points if you get the reference] this weekend on the house show circuit. The team of Mickie James, Maria and Savannah have been taking on Michelle McCool, Layla and Beth Phoenix in ‘Santa’s Little Helpers’ matches and Diva Dirt reader Harmony was there to catch the action on Friday night in Miami!

First, Tiffany asked one of the fans at the top who was the World Heavyweight Champion and moved them to front row.

Second, Natalya managed Tyson Kidd and David Hart Smith against Jimmy Wang Yang and Slam Master J. After Hart Dynasty won, they did a nice promo about their match with DX next week.

Right after that it was a 6 Diva tag match with Mickie, Maria and Savannah vs Layla, McCool and Beth. At the beginning of the match, Mickie and Michelle were showing off their muscles seeing who was better then Beth picked up Michelle and put her on her shoulders and then Maria went on Mickie’s shoulders to show off. I couldn’t see much of the match since tag partners were in the way but from what I saw it was a really good match, Savannah got in it at the beginning and seems to be pretty good at wrestling. Mickie, Maria, and Savannah won and celebrated.

Tiffany was announcer for the ECW title match. Rosa managed Zack Ryder, she got involved a little bit by choking Christian.