In Video: AJ & Vickie Comment on Their Monday Night Fight 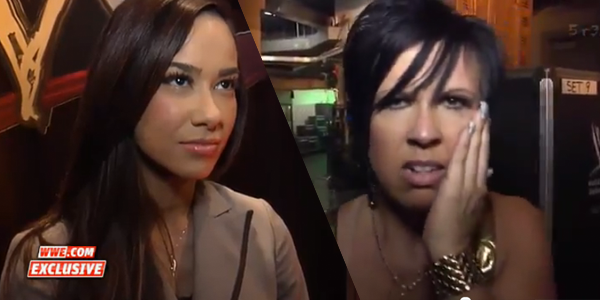 Following Raw General Manager AJ Lee‘s surprising attack on Vickie Guerrero last night, WWE.com caught up with both women to get their thoughts.

Still holding her cheek, Vickie spoke directly to the camera, telling AJ that she was a child who was merely role-playing as General Manager and had no right to be putting stipulations on Dolph Ziggler’s matches. She announced that she was going to talk to the Board of Directors in retaliation:

AJ was a lot less forthcoming with her thoughts, avoiding the question for some time by giving her opinion on Raw’s other happenings. When she was finally faced with it, though, she grew serious and repeatedly stated that she was Raw’s General Manager and that it was her job to put on the best show possible:

It looks like this scuffle was just the beginning. Is AJ’s stint as Raw General Manager about to come to an abrupt end?