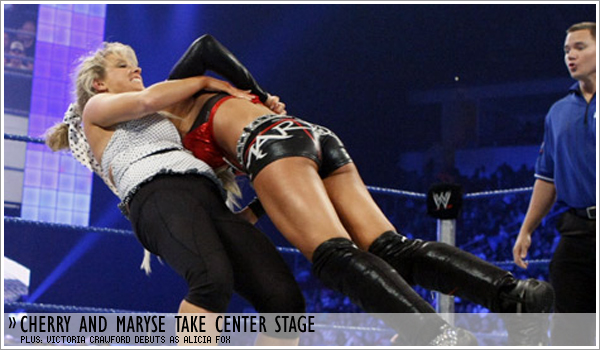 Welcome one and all to the debut edition of SmackDown! Redux!

This week on SmackDown!: It was the night of Cherry and Maryse, as they competed in the featured Divas contest. Meanwhile, we also saw the debut of Alicia Fox.

Thoughts & Reactions
Not a great week for SmackDown! Redux to debut, because in my honest opinion this was the weakest week for the Divas of SmackDown! in quite some time. SmackDown! has improved leaps and bounds in the months since WrestleMania and this week’s show stuck out like a sore thumb in comparison to the strong booking we’ve seen of late. There was just no logic this week; they introduce the new Divas Championship last week and then this week? No sighting of Natalya, who is actually in the Championship match. No qualifying match for her opponent. No storyline advancement surrounding the title at all. Instead, we revert back to Cherry vs Maryse, a feud which should have been dropped and incorporated into the hype surrounding the Divas Championship.

These two Divas, personally for me, do very little. I see no personal investment in them, thus I wasn’t too into this match. They did put on a surprisingly good match a few weeks ago on SmackDown!, but if it’s been done already why do it again?! There’s no storyline advancement here at all, they just did the same match again using the same storylines that led to the first match!!! Cherry picks up the win, whoop-de-doo the match is over and Melanie is left feeling underwhelmed. To me, Cherry vs Maryse is like a starter not the main course, so of course I was left saying, “What? That’s it?!” when I realised this was our lot in terms of the Divas this week *sigh* Furthermore, Michael Hayes returns to creative next week, which is leaving me less optimistic about the women’s division – in his absence, we have actually seen some great matches and great feuds since WrestleMania.

Next up, we had the debut of Alica Fox aka Victoria Crawford. Now I won’t be judging her too harshly based on a 30-second segment, but she looks pretty enough and I hear she’s a decent wrestler. Let’s hope that she can add to the women’s division in the near future. And please, for the love of God use her as a face when that happens. I’m sick of the mismatch in both the divisions; the Divas who can actually wrestle always come in as heels and the ones that can’t are faces. If this girl can wrestle as well as it seems, she should be able to team up with Michelle and Cherry against the likes of Victoria, Natalya and Maryse.

All in all, it was a pretty “bleh” week on both RAW and SmackDown! this week. But anyway, I am going try and be optimistic that both will step up their game next week and since SD! has already taped next week’s show, I think it’s going to be a decent match for the Divas.

Alicia Fox: Not much to go on, given she only appeared briefly.

Cherry: Cherry is competent in the ring and got a nice victory for her record here, but she does nothing to excite me. I don’t dislike her by any means, she just doesn’t have flare.

Eve: What is there to say? She interviewed someone, end of.

Maryse: I think with some fine tuning she could play a good heel, but she’s not high on my list of “Divas to groom”, I think Michelle, Layla and Kelly have more star potential than she does.

The Bad: Cherry and Maryse.

Photos
Below, are digitals of the Divas match from SmackDown! Copyright to World Wrestling Entertainment, Inc.