Is Ivory going into the Hall Of Fame?

The landscape of women’s wrestling has dramatically changed within the past few years since the “women’s revolution” started. Some people would argue that the “women’s revolution” has been happening long before just the past few years. The argument at hand will also say that the revolution stalled during the “Diva’s” era, however there were plenty of women during the 90’s and early 2000’s that paved the way for the current athletes that we see today. Lisa Moretti, better known to fans as Ivory, is one of these pioneers. Recently, her name has been brought up as a possible inductee to the 2018 WWE Hall of Fame. 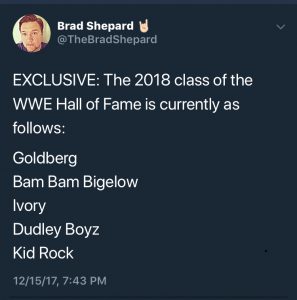 Ivory has had many stand out matches with current Hall of Famers such as Trish Stratus, Lita and Jacqueline. Many people only know Ivory from her time with the WWE, but her career in professional wrestling started way before her WWE debut in 1999.

Tina Ferrari is the name that was used by Ivory in her early years as she successfully auditioned and then performed for the Gorgeous Ladies of Wrestling (GLOW). Known as an original lady of GLOW, Ferrari went on to become tag team champion with Ashley Cartier and even held the top title, the GLOW Championship. The tag team of Tina and Ashley were known as T & A (not to be confused with Test & Albert).Before Ivory became Ivory, she defiantly had already become a decorated wrestler.

Ivory was introduced in the WWE as a storyline love interest for Mark Henry. She would perform in intergender matches with either Mark Henry or his tag team partner at the time D’Lo Brown. During this time the women were mainly known for their “sex appeal” rather than their in ring talent. Even though this time period seemed to hold the talent of the women back, Ivory was always at the forefront of a match. She put on many matches with both Tori and Luna Vachon.

Ivory became a 3 time Women’s Champion in her tenure with the company. Her first two title wins however were from a valet (Debra, who won the title in an evening gown match), and although a legend, a 76 year old The Fabulous Moolah. She lost her second title to Miss Kitty who was an untrained talent. It wasn’t until Ivory’s third title reign that she won from Lita that showed the best from Ivory. At this time she became a member of the Right to Censor stable. The Right to Censor stable arguably had the most annoying entrance theme.

After leaving the WWE she became the ECCW Women’s Champion after she defeated the first champion of the promotion, Rebecca Knox (Becky Lynch). She would hold on to the title from April 2006 to October 2006 when she lost the title to Nattie Neidhart. Ivory would continue to work the indie circuit sporadically, performing for promotions such as Women Sports Uncensored (WSU).

Recently Ivory was on WWE’s Table for 3. In the clip below you can see her speaking with Alundra Blayze and Molly Holly in regards to a time where women were made to do pillow fights and bra & panty matches.

Are we excited about this rumor that Ivory may be in the HOF? Who else would you like to see in the women’s wing of the HOF? Molly Holly? Sable? Chyna? Let us know in the comments!!!