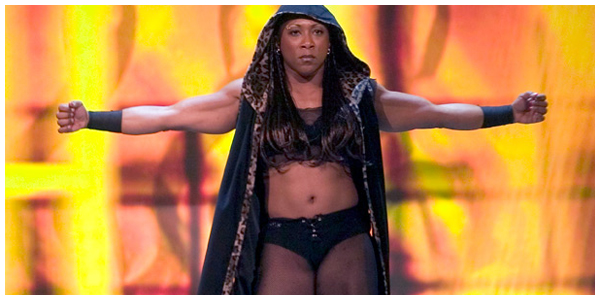 In a nice surprise, WWE.com has added former Diva and Women’s Champion Jazz to their Alumni section. Looks like the bitch is back… on good terms with WWE [even though they did release her twice].

The WWE Alumni page is usually reserved for past stars who are still on good terms with WWE and is in some cases, a first step to becoming a future WWE Legend or Hall of Famer. Jazz sits in company with the likes of Lilian Garcia, Molly Holly and Trish Stratus on the Alumni page.

I’m guessing WWE recently reached out to Jazz or perhaps vice versa? Just last month, WWE caught up with fellow former Women’s Champion Ivory in another blast from the past. It’s nice to see WWE acknowledging some of these talented women that contributed to the women’s division’s ‘golden era’, even though they may not have left the company on the best of terms.

If the WWE gods are listening: Dawn Marie next, please?

Mickie came out to a pretty good pop. She thanked the fans, and said “We did it” and things about being real. Beth came out to a decent pop as well. They exchanged words about facing each other for the Women’s title, anytime, anywhere. Then Vickie came out saying Excuse me, and I swear to God, they booed the sh*t out of her! I’ve never seen ANY female get that kind of heel heat before in my life! To be honest, the only people throughout the entire taping that were even close to heel heat were Chris Jericho and CM Punk, and that’s just by a strand of hair! Vickie was cutting a promo and making the match, but I couldn’t understand half of what she was saying. The booing was that loud and that intense. Oh yeah, the match was Mickie and Beth vs Michelle and Layla.

Michelle and Layla both came out with matching hoodies that said Piggie James. I think. They took them off near the entranceway.

Michelle and Beth started off, and Michelle was getting womanhandled by Beth for the most part, Beth tagged in Mickie and she worked on Michelle for a little while, and then Beth knocked Mickie out, Michelle was shocked and then smiled, and Beth did too (kinda in a somewhat lesbian way) before Beth planted Michelle as well. She walked off with Michelle crawling to Layla, going to try to take care of Mickie, but that didn’t work out as Mickie surprised Layla with a rollup for the win. Michelle was irate, and Beth and Mickie had a staredown from the ring and entrance way.

Maria has a small part on Smackdown wishing Matt Hardy good luck in his Elimination Chamber qualifying match, and Matt mentioned something about her Celebrity Apprentice gig.

Serena shows up THREE times on Smackdown. The first time is right before CM Punk’s EC qualifying match, where CM Punk says that Luke and Serena might have to make a sacrifice for the right cause, with Serena saying “I would do anything for you”. Some people in the audience saw it as something sexual for some reason (Southerns…HA! LOL.) Then Serena accompanied CM Punk (as well as Luke Gallows) for his “match” (There’s a reason I put the word “match” in parentheses. You’ll need to watch to find out.). Then she came out again (with CM Punk and Luke Gallows) during the final segment on Smackdown.