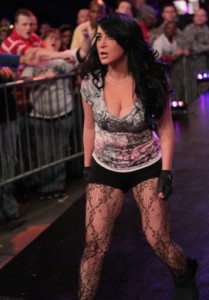 The in-ring debut of Jersey Shore star Angelina Pivarnick this past Thursday on Impact proved to be a dud in the ratings.

Pivarnick’s match, which saw her team with Cookie and Sarita against The Beautiful People and Winter, scored the lowest quarter hour of the entire show at just a 1.12, according to ProWrestling.net.

Angelina’s first appearance for TNA last week fared better, however — the two segments she appeared in scored a 1.32 (mainly overrun of a male match) and a 1.17.

Similarly, JWoww’s much hyped appearance on Impact last October was the lowest quarter of that episode.

To compare, JWoww’s catfight with Cookie scored a 1.23 versus 1.12 for Angelina’s match. This week’s episode of Impact averaged 1.25 compared to the 1.4 average for JWoww’s episode last October.

Perhaps also of note, aside from some press from TMZ, Angelina’s stint didn’t receive the same media attention as JWoww’s did.

Now attention turns to Jersey Shore’s Snooki on Raw this coming Monday. Considering the effect that Jersey Shore stars have had on TNA’s ratings, can WWE and Snooki reverse the trend?

Elsewhere on the show, Roxxi’s return against Madison Rayne scored a 1.20.