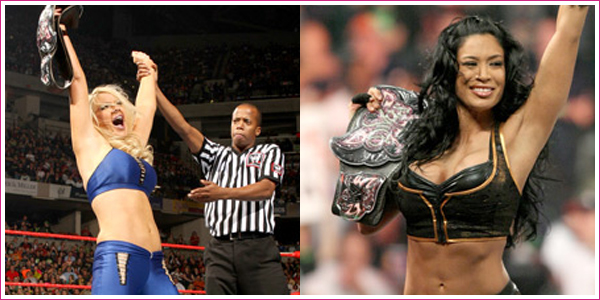 The Divas Championship has changed hands not once, but twice in an unfathomable episode of Raw. [Still in shock!] Jillian and Melina became the fourth and fifth Divas Champions, respectively.

Jillian defeated Mickie James in a short singles match to take the title and can now claim that in her long five year career, she has held a major championship. [Happy now, Jillian fans?] Afterwards, Guest Host Nancy O’Dell announced a Diva trade which saw Melina being traded back to Raw. O’Dell gave Melina a Divas Championship match, which was even shorter than the one prior; Melina pinned Jillian with the Last Call to become the third woman to hold the Women’s & Divas Championship.

The full details of the Diva trade will be announced after Raw on WWE.com, however already announced is that Beth Phoenix has been traded to SmackDown.