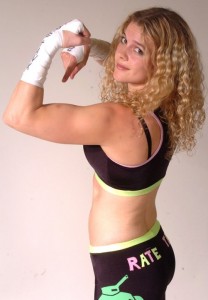 It had been Kellie Skater‘s dream to wrestle in Japan ever since she started wrestling in 2007.

In early May, Kellie, 23, was able to achieve that dream when she was asked to work for a new promotion called REINA, shortly after she returned home to Australia from a long trip wrestling around North America, with shows in both the US and Canada. Asked to be SHIMMER Women Athletes’ surprise representative against Aki Kanbayashi, Skater immediately accepted the offer and not long after was packing her bags to head to Japan.

“When the plane touched down and I saw the ‘Welcome to Tokyo’ signs, it hit me that I was finally there!” Kellie says.

Since April last year, SHIMMER has played host to several of S-Ovation’s top stars — the likes of which include Ayumi Kurihara, Hiroyo Matsumoto, Tomoka Nakagawa and Misaki Ohata. In Japan, S-Ovation’s manager Hachi would dine with Skater most nights that she was there. He would order food for her and during her first meal in Japan, he did not tell her what she was eating.

Skater was surprised by how nice the dish tasted, even after finding out what it actually was. Hachi and Kellie ended up going to many different restaurants and tried a wide variety of Japan’s delicacies, including sashimi, octopus, squid, crab and even eel.

The first full day that Kellie was in Japan was REINA’s debut show and therefore her Japanese debut, so there was not a lot of time to prepare. Before her own debut in a Japanese wrestling ring, Hachi and Kellie visited a JWP show, where some of Kellie’s SHIMMER joshi pals were wrestling — Ayumi in a tag match with her rookie Mika Iida, and Misaki in singles action. The SHIMMER girls welcomed her to Japan with open arms.

“On the way to the show I was starting to feel pretty nervous,” Skater admits.

Upon arriving at the venue, they were shown to their respective lockerrooms. Being a larger venue, there were a few different ones. Skater’s lockerroom had girls who spoke many different languages: English, Japanese and Spanish (the CMLL wrestlers), and she was even lucky enough to meet several well-known joshi wrestlers, including one who was one-half of her favourite match of all time, the legendary Shinobu Kandori.

Kellie took part in the opening ceremony for the show, where the girls were handed balls with autographs on them and a t-shirt to wear that had the company’s logo featured on it. During the ceremony the entire roster stood in the ring whilst a speech was given and then the girls threw the autographed balls to the crowd.

“It was a cool moment to be involved with,” Skater recalls.

Later in the evening, in the fourteen minutes that would make her dream come true, Skater wrestled Aki Kanbayashi for the TLW International Championship – a new title, so whoever won would become the first ever champion. She entered the ring in true ‘Rate Tank’ style, with her protein shaker and resistance bands, only to find a surprise (or should that be two surprises?) waiting for her. Hiroyo Matsumoto and Tomoka Nakagawa were at ringside as her seconds, something that is very common in Japanese wrestling. In a touching moment, Tomoka explained that they were there to support her because they are her ‘SHIMMER family’. During the match, Skater got hold of her protein shaker and ‘hulked up’, which the crowd ate up, and it gave her the strength that she needed to throw Aki around. Unfortunately for her, it wasn’t enough, as Kanbayashi got the better of her for the win.

Despite the loss, Skater says: “I was really happy with my debut there. I enjoyed the match and working Aki.”

On Skater’s last night in Japan, she also participated in her second match for REINA – teaming up with American, Hailey Hatred, against Aki Kanbayashi again – only this time Aki brought Aoi Ishibashi along with her.

Aki was also the one ‘hulking up’ this time after she stole Skater’s protein shake and drank it. It was to no avail, however, as Skater picked up her first victory in Japan when Hatred pinned Ishibashi.

Kellie not only wrestled in Japan; in her down time, she got to be a tourist and experience the rich culture in Japan. She got to visit Hamamatsucho’s famed Pokemon Centre, picking up a ‘Hula Pikachu’ along the way, as well as hitting up both Harajuku and Shibuya. She also made sure to catch up with her ‘party partner’ Tomoka Nakagawa, who Skater claims “may be the best drinker I have ever met, despite being tiny!” (Being one of the tallest people in a lockerroom was something new for Skater.)

She also got to experience Japan’s night life when visiting one of their most famous active nightclub scenes in Roppongi with Hachi and his friends. “We played Japanese drinking games all night and I joked it would be cool if they had Jenga, so the bar staff brought out Jenga! They had freaking Jenga! It was amazing!”

In Oimachi, she got lost looking for a Gold’s Gym and, in fashion with typical Japanese kindness, a passerby helped her find the gym, despite it being in the opposite direction he was going.

In addition to trying new foods and drinks in Japan, she also got to experience one of their oldest traditions when she was asked to tape up her ankle tattoo in the gym (and was only allowed in because it was smaller than 15cms). In Japan, tattoos were, and are, prevalent in organized gangs such as the Yakuza, where they are viewed as a sign of loyalty to the organisation. This is one of the reasons that people with tattoos might be viewed fearfully or suspiciously and not be welcomed in establishments like onsen (public baths) or swimming pools where their tattoos will be visible.

Other adventures included training with Toshie Uematsu (who recently returned to Japan from a mini-tour in the US wrestling for CHIKARA), watching women’s MMA (a promotion named JEWEL) where S-Ovation had a Mongolian fighter named Esui performing, eating at the famed Ribera steak-house (which included a chance encounter with sumo wrestler Akebono!), watching several wrestling shows (Dragon Gate and STARDOM, respectively) and visiting an “overwhelmingly beautiful” temple where she and Hachi had their fortunes told.

Kellie says of her time in Japan: “It was amazing getting to know everyone better and meeting some great new people. My trip to Japan was the best experience of my life. The culture and the people there are amazing.”

“I want to return as soon as possible and have already taken up learning Japanese. I pretty much fell in love with Japan. It truly is an amazing place!”