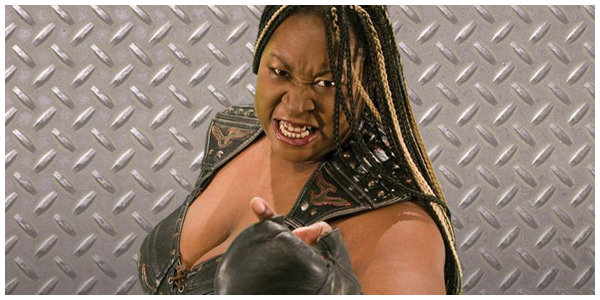 The latest update on Knockout, Awesome Kong is that her request to be released was denied reports ProWrestling.net. According to the website, Kong reacted to the news by backing out of last week’s UK tour at the last minute. Things have seemingly smoothed over it’s reported, after a meeting with Eric Bischoff and Hulk Hogan.

However, the bigger story it seems is what the report claims is ‘lingering heat’ between Kong and TNA management over lousy pay for the TNA Knockouts. As has been well documented from the early days of the division, the Knockouts are usually the least well paid members of the talent roster despite pulling in the highest rated segments on Impact regularly. A low-balled contract offer is what led to former Knockouts Champion, Gail Kim shockingly leave the company and return to WWE.

The bulk of the lingering heat between Kong and the company is said to be over financial matters. Kong is said to be especially touchy when she notices the company spending frivolously on newcomers while also claiming that they can’t afford to give raises to her and other women. The assumption within the company is that Tara and perhaps Christy Hemme are paid well because of their pasts with WWE, but there is a lot of frustration over the pay that the other females receive.

As one of the biggest stars in not only the Knockouts division, but TNA, there’s no real justification for the company not to be paying Kong more. It seems the company realises her value as they refuse to her release her but at the same time, they continue to low-ball Kong and other Knockouts.

The Knockouts and pay discrepancies is a story that just keeps recurring time after time, from Gail Kim to Shelly Martinez to this. For a company owned by a woman, it’s a shambles the way the Knockouts division continues to be rocked by embarassing situations like this.