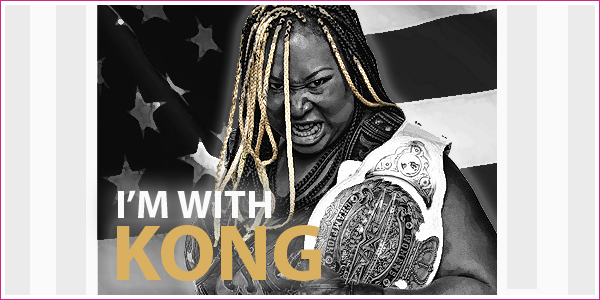 As we enter day two of the frenzy surrounding Awesome Kong and Bubba the Love Sponge, the former Knockouts Champion posted a couple of indirect tweets on her award-winning Twitter page:

“Kongfucious says: sometimes you must feed someone a fist to make them eat their own words.”

“Apologies to all of my supporters for the lack of tweets lately. Trying not to give certain talentless hacks publicity.”

Bubba responded via his radio show this morning. When asked if he was feeling better today, he said that he was until he saw the tweets from Kong, referring to her as ‘you know who’.

Sponge continued to make references to Kong throughout the show and welcomed guest Mick Foley, who had helped Kong’s Wrestlers 4 Haiti with a $2500 donation last week. Read below for notes on the show courtesy of Bubba Wrap Up.com:

* An e-mail said Bubba should’ve been able to hit Awesome Kong back. Bubba said he would’ve loved to blast her, but he thinks he made the right decision. Bubba said it didn’t hurt and would expect more from someone as fat and hideous as her.

* Bubba said he doesn’t care what happens with Kong and he doesn’t want to get a reputation of getting people fired. Awesome Kong continues to bad mouth Bubba on her Twitter page.

* Bubba said he was taken aback since he had just met Kong 15 minutes prior with Hogan, and he could’ve talked things out like he’s doing with Mick. Mick said he knew Bubba was a nice guy and would’ve been livid had he not known Bubba, and he wondered how this could’ve happened.

I love how he complains about her ‘bad mouthing’ him on Twitter after all the smack he’s been talking on his radio show.