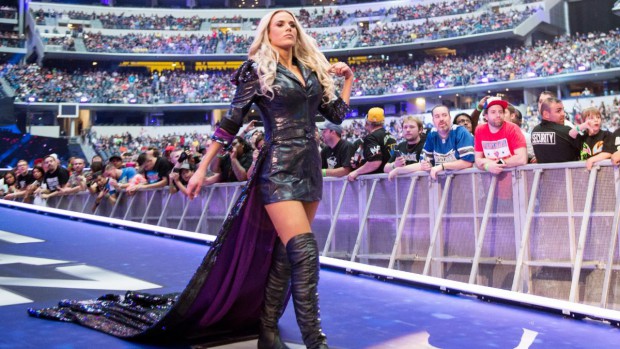 WWE Superstar Lana recently sat down with WWE.com to discuss the progression she has made in her WWE career.

When asked if there was anything Lana was specially training in during her time at the Performance Center, she says:

I’m training in everything MMA, jujitsu, kickboxing, Krav Maga and boxing. Rusev teaches me many things, which is why we do a lot of punching and kicking. I came to the Performance Center just to refine my skills even more before going on to Europe, where I’m going to be competing with Team B.A.D. and Blonde.

When asked whether or not she was nervous to make her in-ring debut at WrestleMania 32, Lana says:

Before WrestleMania, of course, I get nervous because my first match is in front of 101,000 people. Most people start off at 100 people. But, the Ravishing Russian, of course, would like to go big or go home, and do it up on the biggest stage of the year. In Russia, failure is not an option, and doing something average is not an option.

Lana also commented on whether or not she had an interest in pursuing the newly introduced WWE Women’s Championship, saying:

I don’t like telling people what my plans are because I have big plans. If I start saying “Oh, this is what I’m going to do” and “This is what I want to do,” then I know I’m a threat to other people. But I can promise you this: I will be the greatest woman to ever enter WWE, and I will leave the greatest legacy that WWE has ever seen.

You can read the full detailed interview at WWE.com.