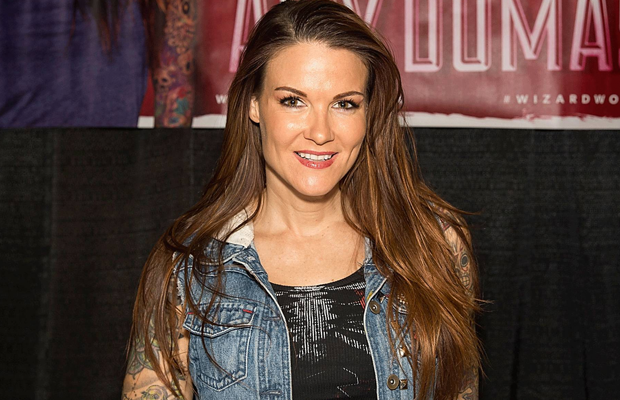 Soon-to-be WWE Hall of Famer Lita joined Chris Jericho‘s Talk is Jericho podcast to talk about her induction, her journey to the WWE, why she left wrestling behind and more.

Learning she would be inducted into the Hall of Fame: “I was down in Nicaragua when they called me and asked if I would be in the Hall of Fame, and also when they announced it, so I was a little detached. I’ve been detached from wrestling in general, but I don’t know if there’s a way to be more detached, to go to a third world country.”

Why she’s in Nicaragua: “I was looking for a place to have a second home. I wanted it to be on the beach, I wanted it to be Spanish speaking…In Mexico, they make if difficult for foreigners to own land, because they want their own people to get property there, understandably so. Nicaragua kind of took the lead from Costa Rica in making it easier to buy property there, so I bought a place and had it built. I’ve been having ‘scavenger hunts’ down there for the past few years.”

Going to Mexico to start wrestling training: “I actually credit the lack of internet for that personal field trip, because I was like, ‘The guys I like, they’re from Mexico, so I guess I should go down there to figure out how to do that stuff they’re doing.’ It was an absolutely great chapter of my life, but it would have been infinitely easier if I could have just typed in ‘lucha libre wrestlers’ and learned everything I wanted to know about them and where they train.”

What she did while in Mexico: “I just went to the matches. There were four matches a week…I didn’t necessarily get the leads I needed to get where I went in the WWE, but it was the start of my journey. The last foreign tour we did before I retired from the WWE was in Mexico. I put on a mask and sat in the audience and watched a match. That was really special to me.”

Joining ECW: “I just showed up. I heard from somebody that they had ring workouts before the shows. I asked somebody who asked somebody if I could just show up for the ring workout…When I was in Mexico, Tajiri and Ultimo Dragon were in the second match every night…hey were doing springboard moonsaults, and so I was doing them. I was just kind of having fun with them, playing the Latin poser I love to be. Then [Tommy] Dreamer calls me over and says, ‘Put your gear on and do a five minute match’ with this other girl, an indy wrestler. So, I did a little five minute match and they asked me to go on the road with them.”

Working with Essa Rios: “At the time I was in Mexico, he was my absolute favorite wrestler.”

Getting the name “Lita”: “We debuted on Heat…Four hours until we went live, they said ‘You kids are starting tonight.’…We went out there and did the match. It was taped on Monday to air on Sunday, so they said they would figure it [our names] out by the time they did the commentary…Somebody told me on Friday or Saturday, ‘I think your name is Lita. I heard that somewhere.’ And I thought, ‘I don’t really like that name. Certainly that’s not it. I don’t know where you got your information from.’ And then I turn on Heat, and they’re saying, ‘It’s Essa Rios and Lita!'”

Her signature look: “I was thinking on a level of function. I was like, ‘I’m doing these moonsaults and I need big ass kneepads, and I don’t like how they look on bare legs, so I want big baggy pants.’ Then I figure out they I need to make up for the fact that I’m wearing baggy pants with some element of looking feminine.”

What made her main event match with Trish special: “It was a pretty cool time, because we were both experienced at that time. With Stephanie, it was a little more novel. With Trish, it was more like, ‘Yeah, you’re damn right we’re in the main event.’ I had experienced more to know what that meant, know that value of that and feel the responsibility of, ‘When you’re on the jet tonight, we’ll pull the numbers that you want.’ We’re gonna hit the times, we’re gonna play with the big boys’ game. We’re gonna hold our own. That was a, ‘I could quit the next day’ kind of thing.”

Why the division was successful during her run: “We had depth…Then you lost Trish and I within two months time, and Victoria wasn’t around too much longer. You were left with just Mickie James, and maybe Melina was there for a little bit. It just felt like your depth was just dropping off. You can’t build a division around one or two people. You can build a storyline around two people, but you can’t have overall interest in the Women’s Title with just a couple of people. I think the lack of depth in the characters has maybe made it go that way.”

Learning while being in a valet role: “I did a lot of valeting, whether it was with Edge or Kane or the Hardy Boyz. Having to be out there with guys who have been in the main event or worked in the indies, I’m listening to everything. I’m sitting there when they’re talking about their segments. I’m thinking like a guy out there. It sounds very sexist to say, but there’s something about the intensity level, the thinking on the fly, things that most of the women don’t embrace.”

The downside of being a popular valet: “I remember being there for a 10-man tag. All the big guys are in it, and I all I remember is the fans chanting ‘Lita’. I thought, ‘I’m in so much trouble right now.’ And then anytime I was involved with those groups, I was given some line that, ‘Well, I figure your character would be scared to be out there, so we’re just gonna leave you in the back tonight.'”

Turning heel: “It was hard, but it was like, ‘Screw it. I’m gonna go with it.’ I was with the cards I was dealt. With what the fans were already doing, there was no point in fighting it, and you can’t half ass that. That’s part of what made it easier: it was so far removed from how I am as a human being. It was like, ‘Step out there and put on your Halloween costume for the evening.'”

Her “live sex celebration” with Edge: “I called all of my friends and my mom and told them, ‘Whatever you do, please don’t watch tomorrow. Do not watch.’ I was absolutely mortified. We both were…He [Vince] wanted me naked. It was ridiculous, but fortunately, I was working with Adam and John Cena. That was the only way to get through it.”

Deciding to leave the WWE: “My contract was coming up. They approached my about resigning, and I just asked if I could have a few house shows off, because I wasn’t sure if I wanted to do this anymore. I just took some time. I had just moved to Atlanta, I had friends who didn’t watch wrestling. I just kind of had more of a life at that point and was living more outside the bubble than I had for the last seven years. I just thought it was time for whatever was next. I felt that I had crossed off every major accomplishment that I could.”

Her favorite matches: “The one that was really fun was The Rock and me as tag partners against Triple H and Trish. That was the first time we were in the main event, and we were goofy kids. And then one much later in my career would be the main event with Trish, for what went on in the ring to what happened behind the scenes, how our brains just functioned well together.”

This interview is a must listen, as it’s a rare insight into the life and career of Amy Dumas. You can listen to the entire interview on PodcastOne.com.