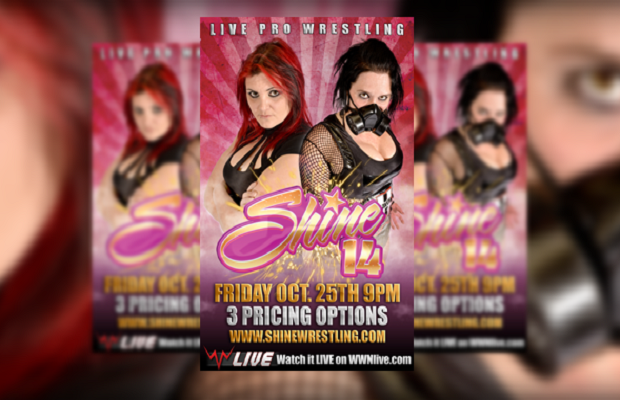 The main event will see Hiroyo Matsumoto challenge Rain for the SHINE Championship, while other matches of note include Kellie Skater and Tomoka Nakagawa defending their SHIMMER Tag Team Championships against Valkyrie’s Allysin Kay and Ivelisse, a Last Woman Standing match between Jessicka Havok and Saraya Knight, and Amazing Kong (WWE’s Kharma) vs Madison Eagles. The show also includes the last match of Nikki Storm‘s US tour, facing off against Nikki Roxx.

SHINE 14 comes to us live from the Orpheum in Ybor City, Florida, starting at 9pm ET (2am GMT). Order the event on on WWNLive.com.

Solo Darling defeated Su Yung. Solo was dressed as Shark Boy, and was referred to as ‘Shark Solo’ throughout the match, which was a short Halloween-themed comedy outing with plenty of biting and silly things. Solo got the win after going to the outside and hiding under the ring with Daffney as the ‘Jaws’ theme hit, then coming out the other side and rolling up a confused Su Yung for the three-count.

Mia Yim defeated Savannah Summers and Shanna. Mia Yim dominated the match from the get-go, impressing in several spots including a double-applied single leg Boston crab to her two opponents, a double suplex and taking a brutal double stomp while hung from the top rope. She eventually got the win by landing a sick package piledriver to Summers.

Nikki Storm defeated Nikki Roxx. A calculated effort from both women that saw them each kick out of a number of the other’s signature moves. The finish came when Mercedes Martinez came out and attacked Daffney, creating a distraction that allowed Storm to pin Roxx.

The S-N-S Express defeated Santana, Amber O’Neal and Leva Bates. Leva was dressed as something from Silent Hill, according to Lenny Leonard on commentary. This was your standard entertaining-but-hard-to-follow 6-person tag match, with Jessie Belle pinning Santana after a Kiss My Sass from Stephie.

Kimberly defeated Mercedes Martinez by countout. During the match Daffney was watching from a distance, and Kimberly looked keen to impress her early on. Following the All-Star Squad entering ringside, Martinez simply walked out, allowing Kimberly to pick up the countout victory. After the match, Kimberly celebrated with the All-Star Squad, who appear to have a new member!

Kellie Skater and Tomoka Nakagawa defeated Allysin Kay and Ivelisse to retain the SHIMMER Tag Team Championships. This was a great, blink-and-you’ll-miss-it affair that saw all four women impress. The finish came after a Lights Out double kick combo onto Kay, allowing Nakagawa to pin her for the win.

After the match, Jessicka Havok came out and confronted Kay, issuing an ultimatum – either Valkyrie or their friendship. After a moment or two of thought, Kay and Havok embrace and leave the ring together, leaving Ivelisse and April Hunter looking miffed.

Amazing Kong defeated Madison Eagles. Eagles had a number of forks hidden about her person which were retrieved by the referee before the match. This was another superb back-and-forth effort with a plethora of near-falls that saw Kong get the win with a second rope diving splash.

Saraya Knight defeated Jessicka Havok in a Last Woman Standing match following interference from Allysin Kay. Havok and Saraya tore it up around the Orpheum, with vicious chair shots, kicks to the groin and everything in between. The finish came after Havok hit a lethal-looking Tombstone Piledriver on the bar to Saraya, before getting taken out by Kay, who helps Saraya up, allowing her to avoid the referee’s count. Valkyrie and Saraya continue to attack Havok in the ring after the match.

Rain defeated Hiroyo Matsumoto to retain the SHINE Championship. This was an awesome match, both women matching each other hold for hold for the majority of the contest. A backdrop driver towards the end had the match basically won for Matsumoto, but for April Hunter pulling her away at two and three-quarters. Rain responded with an Implant DDT to get the pinfall.

After the match, Lenny Leonard announced that the next challenger for the SHINE Championship has already been signed for SHINE 15 in December. Daffney enters the ring with Solo Darling and introduces Amazing Kong as the new number one contender. The three stare down Valkyrie from ringside as the show fades out.

That’s it for our live coverage of SHINE 14. Join us tomorrow for a full review!