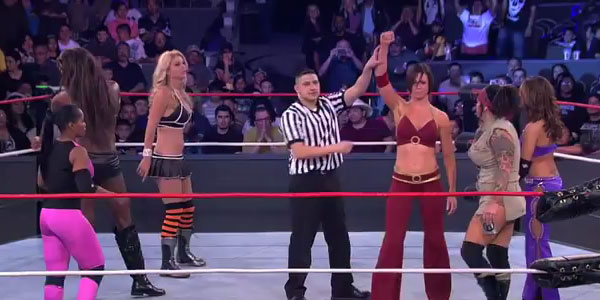 Hola, como estas? Why yes, I am opening this with some Spanish lingo in honor of the newfound Lucha Libre USA Watch. For those who aren’t familiar with the promotion, it is a Mexican-style wrestling show that airs Saturday mornings on MTV2 and it features some very familiar faces to the women’s wrestling crowd. On today’s episode, we had a six Chica (term for their females) tag match featuring Tigressa Caliente (TNA’s Rhaka Khan), ‘Nurse’ Chrissy Cialis (Kristin Astara), and Jacqueline Moore against the trio of Nikki Corleone (Nikki Roxx), Rebecca Reyes (Reby Sky), and ODB!

Let’s get things started with some lucha libre!~

As we head out to the packed crowd, ring announcer, Leticia Castro, proclaims that the following contest shall be a six Chica tag team match. The rules for said match are that the only way to win is by pinning the designated captain of a team, which sets it apart from the typical six person tag. Out first comes one of the females to debut with the promotion back in season one, Tigressa Caliente. (Side note: I enjoyed Rhaka Khan in TNA so this excites me.) Following up with her grand entrance, we have Nurse Chrissy Cialis who claims the audience has no pulse because they are not cheering for her. (genius!) Completing the “Rudos”, or villain team, we have the phenomenal veteran, Jacqueline Moore.

Up first for the trias, or fan favorite team, we have another woman who has literally nearly done it all in wrestling. From SHIMMER to WSU to TNA, it’s Nikki Corleone! The fans are immediately drawn to her, as up next comes what I believe is the in-ring debut of Rebecca Reyes, who looks great and has actual gear which I heavily commend her on. Rounding out this team comes the one and only, a woman who needs no introduction (and actually gets to keep her name), ODB! Once all six women enter the hexagonal ring, the referee places bands on both Tigressa and Nikki’s arms to signal that they are the captain, thus they are who must be pinned in order to win the match. With that, we start things off!

Rebecca and Tigressa start things off with an intense face off, before Caliente tosses her back to display the size advantage she pertains to Reyes. Quick tag in to Chrissy Cialis, who kicks Rebecca in the stomach and sends her off the ropes. Reyes ducks a roundhouse kick attempt, but as she runs off the other side, Tigressa and Jacqueline attack her from behind (Rudos indeed!) Chrissy then lifts her up into the air and drops her with a sick backbreaker across the knee, before tagging in the veteran, Jacqueline. Jackie takes control of Reyes with some knees to the stomach and an intense “hairplane”. (Credit: Angel Orsini for that term.)

Jackie taunts Nikki and ODB, before tagging in Tigressa Caliente. Tigressa takes advantage of Reyes with a kick to the stomach, before slowly dragging her around the ring and yelling at her. Axe kick to the back of Reyes, before executing a unique splitting pin combination. She makes the cover, but lifts Rebecca up before the count of three as if just to toy with her. Tag in to Chrissy, who continues the beat down on Rebecca with a bodyslam to the canvas. Nurse Cialis begins to perform CPR on the downed Reyes, before covering for another two count and lifting her opponent up to toy with her some more. Cialis goes for a running elbow, but Reyes manages to roll out of the way and tag in ODB!

ODB ambushes Chrissy with some running shoulder tackles, followed by sending her into the corner and running forth with a splash! Chrissy falls into the corner and is met with a bronco buster by the wild and crazy ODB. She picks Cialis up and drops her with the fallaway slam before kipping up and posing for her adorning mexican fanbase. Nurse Chrissy is hoisted up for a bodyslam attempt but she slides out the back and tags in Tigressa. Caliente kicks ODB in the bottom, before nailing an arm hook booted jawbreaker to the face. Tigressa then tags out to Jacqueline Moore, as the crowd screams for ODB.

Jackie enters the mix and begins to pound on the back of ODB. Back Suplex which displays ODB’s…interesting form of underwear in a cover for a two count. Jackie tags Tigressa back in as the rudos just destroy ODB. Chrissy and Tigressa make some added quick tags to each other, as Tigressa throws ODB into the corner and executes a beautiful cartwheel elbow. She goes for a running big boot into the corner, but ODB rolls out of the way and tries to make a tag. Jackie tries to stop her, but ODB proceeds to kick her backwards and make the tag in to Nikki Corleone!

Nikki charges in like a house of steam, taking down Jackie with some punches. Cialis tries to interfere as well, but she faces the same fate as her partner. Nikki then proceeds to hit her awesome back body suplex slam to the veteran, as she goes to toss Chrissy into the ropes. Cialis uses her inner nurse strength to reverse it, as Corleone gets planted with the knee of Tigressa Caliente. This sparks Rebecca Reyes to hop in and go to choke Tigressa, but Caliente backs her into the corner and lifts her onto the turnbuckle. ODB attacks Caliente from behind and sends her right into the corner where she is drilled with a sick Tornado DDT by the former LLUSA interviewer. Nikki Corleone then leaps off the top rope with a crossbody onto the team captain and gets the three count! The trias team of ODB, Rebecca, and Nikki emerge victorious in this six chica tag!

Thoughts: A very enjoyable match for me! I wasn’t sure what to expect since I’ve never seen a women’s match from Lucha Libre USA, but it’s pretty great to see them given so much time to go out there and perform. Not to mention, single person entrances are pretty unheard of in today’s televised wrestling society so that was definitely something I enjoyed. It’s fun to see a lot of females we already know of getting to mix it up, and I particularly thought each one held her own in the match. Rebecca impressed me as I wasn’t sure how well she would be for being relatively new, but I really enjoyed her. ODB was her usual fantastic self, as were Jacqueline, Nikki, and Chrissy. Tigressa was the wild card for her team as Rebecca was for hers, in that it’s been a long time since we’ve seen her compete, but I thought she was great. The cartwheel elbow looked very cool coming from someone her height and I like that she doesn’t stick to the typical “tall female” moveset. Overall, an awesome showing from Lucha Libre USA. Hoping to see more in the future!